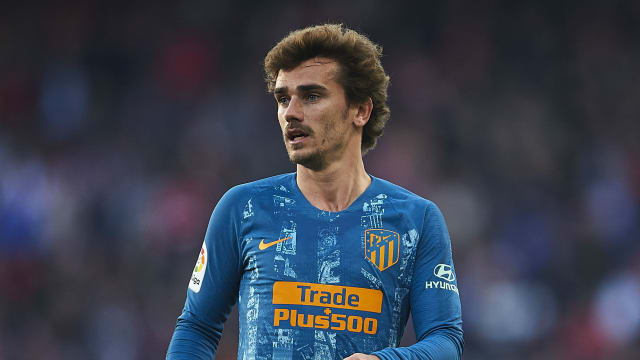 Diego Simeone is ready to call upon star forward Antoine Griezmann for the Copa del Rey round-of-16 encounter with Girona.

Griezmann was rested for both legs of Atletico's tie against minnows Sant Andreu in the previous round.

But Simeone hinted he will select a strong side despite lying second in LaLiga and having a mouth-watering Champions League showdown with Juventus to come next month.

"Griezmann will train like the others, he is the most ambitious player we have," the Atleti boss told a pre-match news conference.

"We give importance to the cup, the Champions League and everything we play in the shirt of Atletico.

"We will try to compete [in line] with the demands that there is for a club like Atletico. We will go out with players who can hurt Girona."

Griezmann's fellow France international Thomas Lemar started Sunday's 1-1 draw at Sevilla after almost a month out with an ankle injury.

Simeone was impressed with Lemar's efforts and pointed out the winger was still adapting to his role at Atleti having joined from Monaco last year.

| PRESS CONFERENCE
@Simeone, on the #GironaAtleti match: "It’s an important game against a team that has always made things difficult for us."#AúpaAtleti#CopaDelReypic.twitter.com/j4S0GRJ0W1

"In general, the team played a good game in Seville, competed well, and Lemar was very important for us," he said.

"He did not play the game he wanted to play but when it came to it he was better, growing and improving.

"We have to be patient and wait for a fundamental player for us. For sure, the important thing is we will find the Lemar that we hope he has inside."

Lemar and any other high-profile signing has an established style with which to integrate at Atleti, with Simeone celebrating the seventh anniversary of his first game in charge – a 0-0 draw at Malaga – on Monday.

Two Europa League triumphs and an unforgettable march to LaLiga glory in 2013-14 stand as the highlights but the 48-year-old Argentinian was reluctant to identify any seismic changes along the way.

"The first game was in Malaga. If we see how that game is played and [how Atletico play] today, there are enormous similarities," Simeone added. "We had a few days and [the playing style] was recognisable.

"What motivates me is not to get away from the present, what has made us strong is to look at the present. If we do that we will surely be on the right path."