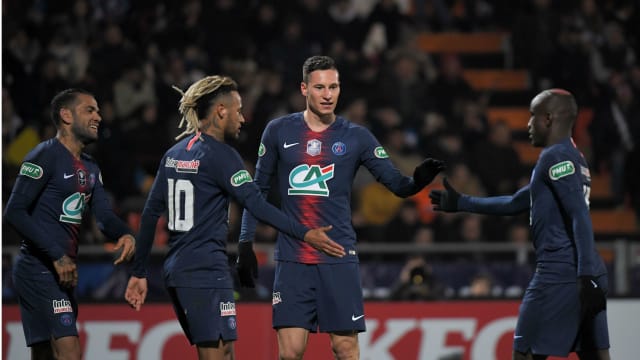 Thomas Tuchel was not surprised by Paris Saint-Germain's struggles to break down Pontivy GSI in Sunday's Coupe de France encounter.

PSG eventually ran out 4-0 winners over fifth-tier Pontivy, but Sylvain Jule's own goal was all that separated the sides until the 70th minute, when Neymar finally got the better of the impressive Clement Daoudou.

Kylian Mbappe's penalty added further gloss soon after, with Julian Draxler getting in on the act late on.

And Tuchel acknowledged that the performance may not have been reflective of the scoreline, but was nonetheless impressed with PSG's display.

"I was expecting this type of match," Tuchel told reporters.

"If you play seriously, it's not possible for a fifth division team to beat us. That's what the team did.

"We did two very intense and very serious training sessions, so I was confident before the match.

"It was not easy because the opponent was very organised and we lost a lot of easy balls.

"The last passes were not precise enough to score two or three goals in the first half. We have no injuries, we have won the merit and for that, I am happy.

"We can play better, but it was not necessary today, that's why it's a good start to the year for us."

50 - Neymar has played his 50th game in all competitions with @PSG_English (45 goals, 24 assists). Against Pontivy tonight:

165 touches (his highest tally with PSG)

Moussa Diaby, who came on from the bench to score the winner in PSG's Coupe de la Ligue clash with Orleans in December, again impressed as a substitute, teeing up Neymar for the Brazilian's 17th goal of the season.

And Tuchel was delighted to have the likes of Diaby to call upon if needed.

"Even at 1-0 after an hour of play, I knew we could always accelerate the match with players like Moussa Diaby and our technical skills," Tuchel continued.

"Moussa was decisive, it's important. I knew that the opponent could not play with this intensity for 90 minutes and we would find spaces between the lines in the last twenty minutes."

Tuchel's focus will now switch to the Coupe de la Ligue quarter-final tie with Guingamp, before PSG return to Ligue 1 action against Amiens.