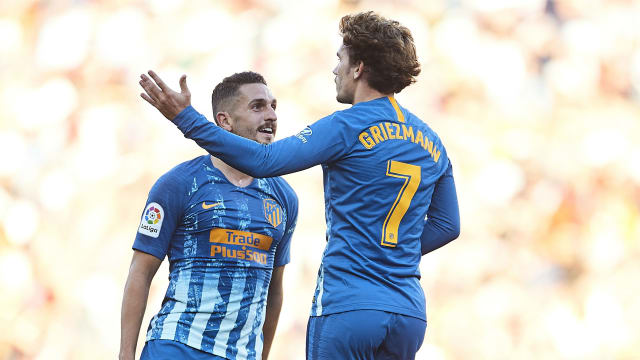 Antoine Griezmann's stunning free-kick secured a 1-1 draw for Atletico Madrid at Sevilla as they failed to put pressure on LaLiga leaders Barcelona.

Diego Simeone's men, whose only top-flight defeat this season came back in September, missed a chance to wipe out the three-point gap to Barca ahead of the champions' trip to Getafe, but did at least maintain their two-point advantage over their third-placed hosts.

Wissam Ben Yedder broke the deadlock in the 37th minute at the Ramon Sanchez Pizjuan, shortly after Andre Silva had come within a post's width of doing so.

But Atletico were level just before the break courtesy of Griezmann's moment of brilliance, earning a point that will have suited the Camp Nou giants more than the two teams involved.

Sevilla dominated possession in the opening stages but it took until the 15th minute for the first shot in anger, Roque Mesa flashing a strike wide from an awkward angle.

Pablo Machin's team were almost caught on the counter-attack as Griezmann's swerving effort from 20 yards had Tomas Vaclik at full stretch to keep it out.

Sergio Escudero headed well over the crossbar after leaping to meet Jesus Navas' searching cross and Silva struck the woodwork with a fierce shot before Sevilla made the breakthrough.

The quick-thinking Daniel Carrico prodded Navas' cutback on to Ben Yedder, who turned and side-footed home to give his side a deserved lead.

It did not last long, though, with Griezmann's typically brilliant set-piece leaving Vaclik helpless.

4 - Antoine Griezmann has scored at least one goal in his last four LaLiga games against Sevilla (six goals). Hammer. pic.twitter.com/uhr9CV9ymK

There was an early exchange of chances at the start of the second half, Saul forcing a smart stop from Vaclik and Pablo Sarabia similarly calling Jan Oblak into action.

Former Sevilla forward Vitolo was brought on to jeers from the home crowd just before the hour mark but it was firm fans' favourite Ben Yedder who almost scored again, dragging a low shot just wide of the far post.

Griezmann spurned an excellent chance to win it eight minutes from time, shooting straight at Vaclik after racing through on goal, while Oblak denied Joris Gnagnon at the other end as a match featuring 12 yellow cards ended all-square.

What does it mean? Draws denting Atletico's title bid

This was an eighth draw of the league season for Atletico, who missed a chance to turn up the heat on Barca with a fourth win on the spin. However, defeat would have seen them drop below Sevilla, whose performance probably merited all three points.

Top-class players have it within themselves to dictate games, but when that proves impossible, they still find a way to make a mark. Griezmann did just that, punctuating an otherwise unremarkable display with a superb goal that ultimately wrapped up a hard-earned share of the spoils.

In a game of generally high quality, one man struggled to find his rhythm and the stats leave Sarabia with nowhere to hide. A passing accuracy of 56.3 per cent would go some way to explaining why he was finally hauled off in the 79th minute, having also been booked.