Ravens QB Jackson: I didn't play my game at all 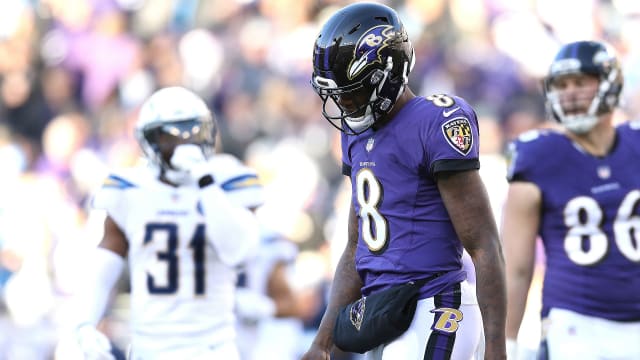 Lamar Jackson bemoaned his first NFL playoff appearance after the Baltimore Ravens were eliminated by the Los Angeles Chargers.

Rookie quarterback Jackson, 21, struggled through most of the Ravens' 23-17 wildcard loss to the Chargers on Sunday.

Jackson discussed his performance with reporters after the game.

"I feel like I played poorly," Jackson said, via NFL.com. "There's a lot of things we could've did down the field that could've put us in a better situation. Just got to move on and get ready for next year."

The Ravens failed to score in the first half and Jackson tallied just 17 passing yards in the period.

In total, he completed 14 of his 29 passes for 194 yards with two touchdowns and an interception.

Jackson also fumbled away the ball on the Baltimore's final drive late in the fourth quarter when they had a chance to tie the score or take the lead.

"I wasn't playing my game today. I'm ticked off by that," Jackson said. "I didn't play my game at all. There's a lot of things I need to work on."

Jackson led Baltimore to wins in six of his seven starts after he replaced Joe Flacco under center in mid-November.