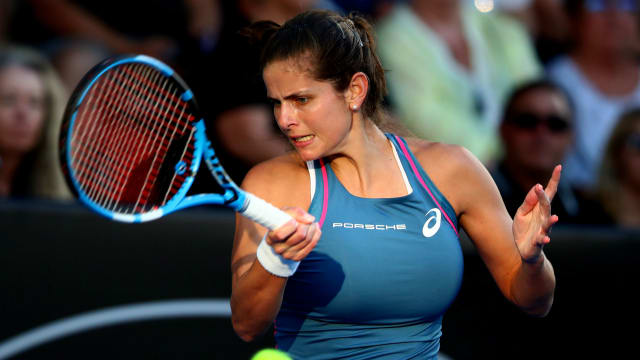 Defending champion Goerges came through a stern test on Sunday as she had looked set to become the latest in a series of big names to fall to Andreescu in a remarkable week.

The 18-year-old, who has only once reached the main draw of a grand slam, came through qualifying in New Zealand before taking out Caroline Wozniacki in the last 16, then Venus Williams, then Hsieh Su-wei.

Andreescu wasted no time in seizing the initiative, the Canadian breaking twice early on for a 4-0 lead in the first that had Goerges reeling.

Indeed, even as the favourite belatedly found her feet with a pair of breaks, there was no let-up in Andreescu's attack and she rounded out the opener, in which Goerges failed to hold serve, with consummate ease.

It was Goerges' turn to make swift progress in the second as she finally overcame the aggressive Andreescu return after breaking for an early lead and, although the Canadian briefly hit back, the match was all square after two sets.

Andreescu could not stay with her esteemed opponent and immediately lost her serve in the third, giving Goerges a platform to see out an ultimately comfortable victory following a pair of further breaks.