Pellegrini: No issues with Arnautovic 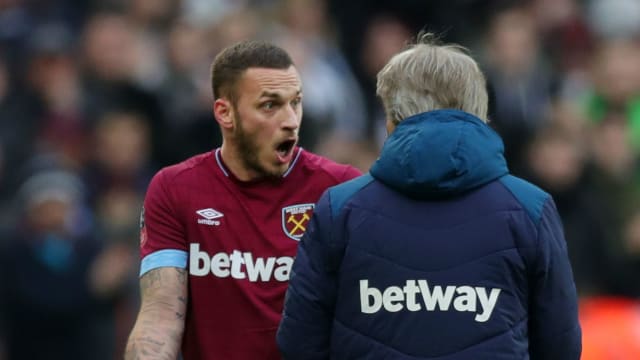 Manuel Pellegrini has played down a touchline disagreement with Marko Arnautovic, who was taken off during West Ham's 2-0 FA Cup win over Birmingham City.

Arnautovic scored West Ham's second-minute opener at London Stadium, but went off injured 18 minutes later - although he seemed to dispute the decision to take him off as he exited the field.

Pellegrini has shrugged off the suggestion that there are any issues with Arnautovic, insisting that the striker was determined to continue but could not be risked.

"Marko felt a pain in his back and at the beginning he wanted to recover, but he could not continue," Pellegrini said.

"It was not good to take a risk as he has just returned after an injury and he played 90 minutes less than 72 hours ago and 65 minutes in the other game, so it was good for him not to continue.

"There is no problem and he scored a goal."

Arnautovic's replacement, Andy Carroll, netted West Ham's second late on, and Pellegrini was delighted to have the former Liverpool man back on goalscoring form after a 368-day draught.

"Andy has a career behind him and he is a player who, when he is playing, something is always happening around him," he said.

"He is coming back after a long injury and I hope he will contribute a lot to our team in the second half of the season."

Pellegrini also used Saturday's encounter to hand Samir Nasri, signed as a free agent following a successful trial at the club, a debut, and was impressed by the playmaker's display.

Your Man of the Match! pic.twitter.com/hDqXGQOeOV

"Nasri was another positive thing," Pellegrini added. "He is a player whose performances will improve with every minute he plays because he is a top player."