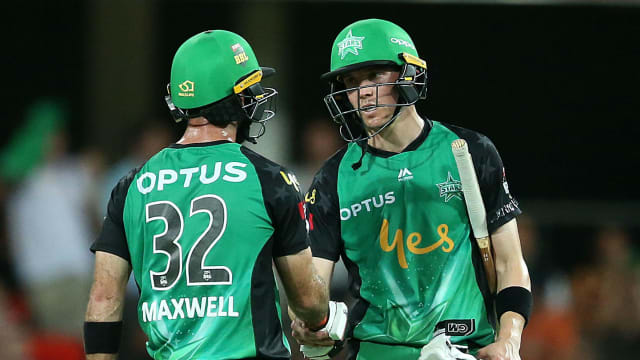 Australia international Maxwell clinched the Stars' third straight win in the Big Bash League with 16 balls remaining by launching a huge six over deep midwicket that took them past the target of 136.

Melbourne now sit second in the table, while the Thunder slipped to fifth after a third loss in their last four outings.

Sydney opener Jos Buttler reclaimed his place as this season's leading run-scorer from D'Arcy Short, but he fell for just 18 and Scott Boland (2-28) added the scalp of Callum Ferguson for a golden duck off the next ball.

England Test captain Joe Root made 26 off 28 deliveries before being dislodged by Marcus Stoinis (2-29), who denied Daniel Sams a half-century after he stuck four sixes en route to a 25-ball 42.

Stoinis (34) also played an important role with the bat for the Stars, but it was Maxwell and Larkin who got them across the line in fine style.

Maxi goes BANG and this one is over! #BBL08pic.twitter.com/IWgLdR41Jy

Having been named in Australia's ODI squad for the forthcoming series against India, Stoinis showed just how useful he can be in the limited-overs formats.

He took the key wickets of Root and Sams as the Thunder were limited to an achievable total, while six fours - including three in succession off Jono Cook (0-22 from two overs) - displayed his game-changing ability.

Cook will no doubt have been disappointed with his performance, having met an embarrassing end in the first innings.

Gurinder Sandhu's (3) decision to squeeze two out of a dink to long off enabled Ben Dunk and Dwayne Bravo to combine to whip the bails off and remove Cook for zero runs and without facing a single delivery.

Bravo had removed Chris Green (14) two deliveries prior as the Stars stymied the Thunder late on.

Thunder 8-135 at the end of the innings #ThunderNation

Sydney's bowling attack was finding it difficult to break Maxwell and Larkin's union, and a blunder from Fawad Ahmed did little to help.

He may have claimed an important wicket in the shape of Stoinis, but when Sam Rainbird's delivery came off the thigh of Maxwell and headed for the boundary at fine leg, Fawad slid beyond the ball and let it through his grasp for four leg byes.

To add insult to injury, Maxwell pulled a short ball beyond Fawad off the very next delivery to add another four runs.

Fielding's not always as glamorous as direct-hit run-outs #BBL08pic.twitter.com/j7AN4AVMiL