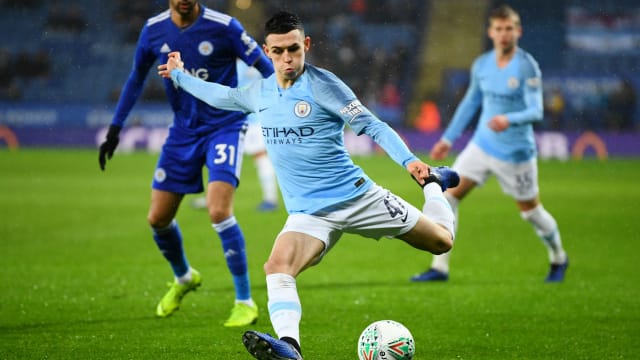 Phil Foden is satisfied with the amount of first-team opportunities he is receiving at Manchester City.

England Under-21 midfielder Foden was handed a senior debut as a 17-year-old last season and has made 15 appearances across all competitions this time around.

However, he is yet to make a Premier League start and was absent from the matchday 18 as Pep Guardiola's men secured a vital 2-1 win over title rivals Liverpool on Thursday.

Foden is expected to start when Rotherham United visit the Etihad Stadium in the FA Cup third round on Sunday, as he has in each EFL Cup match for Pep Guardiola's men this term. The first leg of their semi-final at home to Burton Albion comes on Wednesday.

After signing a new long-term contract last month, Foden's levels of involvement in Guardiola's side are being keenly observed – especially in light of other jewels of City's academy system seeking pastures new.

Jadon Sancho has flourished since joining Borussia Dortmund in 2017, breaking into Gareth Southgate's England setup, while Brahim Diaz is reported to be on the verge of a switch to Real Madrid after entering the final six months of his contract.

"Every time I play for City, I enjoy it. I try and take every opportunity," Foden told City's official website. "I think I've been doing quite well. I'm still learning and trying to improve.

"I try and get better every day – in all my game, not just one area. I'm still young and need to learn so much."

The FA Cup was the only domestic honour to elude Guardiola's side last season, with City dumped out by League One Wigan Athletic in the fifth round.

As such, Foden is well aware of the risks that come with playing lower-league opposition, with Rotherham 21st in the Championship.

"They'll come to the game, want to win and they'll want to play their best," he said. "We have to take the game seriously, not get carried away, do what we do normally do.

"They might have a game plan where they put five at the back and get men behind the ball – that's something we'll have to adapt to.

"We need to keep the ball, be patient and try to break them down. It won't be an easy game by any means but we're more than capable of winning, so let's get the job done."