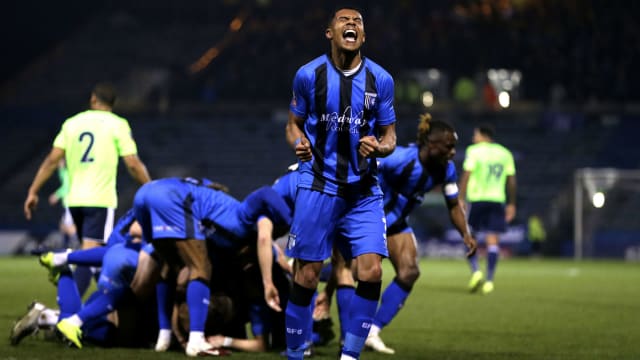 Each of the top-six Premier League sides in FA Cup action on Saturday came through unscathed, but the third round was not without its shocks.

Manchester United, Chelsea and Arsenal all eased to victories, although none of them could match the standards set by seven-goal Tottenham at Tranmere Rovers on Friday.

In one of the day's late kick-offs, Arsenal travelled to Blackpool and teenager Joe Willock grabbed a brace in a 3-0 away success.

However, standout results came at Gillingham, where the League One outfit upset top-flight Cardiff City, and Bristol City, as Huddersfield Town lost to the Championship side.

Elliott List hit the target for Gillingham nine minutes from time and Neil Warnock's Cardiff, who lined up with several first-team players, could not muster a response.

Huddersfield also crashed out in a 1-0 defeat, with Josh Brownhill grabbing the only goal for Bristol City 18 minutes from the end.

Southampton did take their place in the fourth-round draw, but they face a replay at home to Derby County after letting a two-goal first-half lead slip to draw 2-2 at Pride Park.

Outside the Premier League, the day's biggest scalps saw Ipswich Town suffer more FA Cup frustration as they were beaten 1-0 at Accrington Stanley, while rivals Norwich City dramatically lost at home to Portsmouth in injury-time.

9 - Ipswich have been eliminated from the FA Cup at the third round stage in each of the last nine seasons, a run stretching back to the 2010-11 season. Ploughed.

With VAR in use in the six matches hosted by Premier League clubs on Saturday, some sides were experiencing use of the technology for the first time.

Manchester United saw a Fred goal disallowed for offside, only for the replay to indicate a foul and a penalty, which Mata dispatched, and there was further drama as Burnley beat Barnsley 1-0.

The Clarets thought they had been awarded a first-half penalty at Turf Moor, only for the decision to be overturned for offside as Matej Vydra started his run-up. Chris Wood scored a stoppage-time spot-kick following a second delay.

Sean Dyche said afterwards: "I am a big fan of the concept but, for the first penalty, I felt the time to get to the decision was the big thing.

"The referee allowed the set-up for a penalty and I know we are learning about it but I think the referee should grab the ball and walk outside the penalty area, so there are no implications."

SD: "I'm a big advocate of VAR but I think the referee needs to hold the ball. I know they want to be right, but they do need to speed it up and I do think those things will get ironed out."

Brighton and Hove Albion, West Ham, Everton and Crystal Palace all booked their places in the next round, with the Seagulls winning at top-flight rivals Bournemouth 3-1 after a quickfire first-half double.

West Ham, Everton and Palace were less assured, with the Hammers waiting until stoppage time for an emotional Andy Carroll to add to Marko Arnautovic's opener in a 2-0 win over Birmingham City.

Marco Silva's Toffees netted early through Ademola Lookman and Bernard but could not increase their lead, settling for a 2-1 victory at home to Lincoln City.

Palace left it late, scoring through Jordan Ayew in the 86th minute as Grimsby Town, who played with 10 men for 88 minutes, were beaten at Selhurst Park.