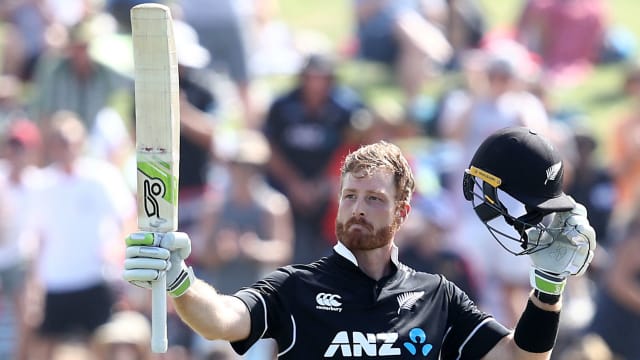 Martin Guptill scored a century and James Neesham starred with bat and ball as New Zealand sealed a comfortable 45-run win over Sri Lanka in the first ODI at Mount Maunganui.

Black Caps opener Guptill – who missed the limited-overs matches against Pakistan in October and November with a calf injury – smashed 138 for his 14th ODI hundred, before Neesham's incredible unbeaten 47 off just 13 deliveries led the hosts to 371-7 in their innings.

Niroshan Dickwella (76) and Danushka Gunathilaka's (43) 119-run partnership for the first wicket had Sri Lanka in a strong position at 119-0 in the 18th over, but Neesham (3-38) dismissed them in successive sets of six to change the complexion of the match.

Kusal Perera plundered a brilliant 102 off 86 balls to keep the tourists' hopes alive but, when he fell to Trent Boult (2-65) with fewer than five overs remaining, Sri Lanka's chances of snatching victory ended.

VICTORY by 45 runs for the BLACKCAPS and a one nil series lead!

After Colin Munro (13) sent a leading edge off Lasith Malinga (2-78) for just 13, Guptill soon found his groove and claimed a trio of fours from the same Nuwan Pradeep (2-78) over, the exemplary timing displayed by him and captain Kane Williamson (76) proving key to a 163-run union.

Williamson got a fifty on his home ground with an intelligent flick before sending an inside edge from Pradeep onto his stumps as the second-wicket stand ended just 17 short of New Zealand's record, but Guptill was unperturbed and had his ton with a cover drive to the ropes.

Guptill's time was up when he sent Thisara Perera (2-80) to point, but Ross Taylor (54) kept the Black Caps ticking along, with three fours off Malinga helping him secure his 44th ODI fifty.

14th ODI century
Successful return from injury
Passed 6,000 ODI runs @Martyguptill is the #NZvSL Player of the Match for his fine 138 at the Bay Oval! pic.twitter.com/TsHCrdqj78

Debutant Tim Seifert was involved in a mix-up that saw Henry Nicholls (15) run out before falling to Malinga for 11, but Neesham gave the hosts a timely boost in stunning fashion with five maximums from a Thisara over that went for 34 runs.

Neesham ended New Zealand's innings with another six and he halted Sri Lanka's strong start when Gunathilaka sent him back to Seifert.

A misjudged drive made Dickwella the next to fall to Neesham, but Kusal did his best to keep the tourists in the hunt for an unlikely win.

However, after 13 fours and one maximum, a top-edge off Boult spelled the end for Kusal as New Zealand claimed a third straight win of the tour after back-to-back Test triumphs.