Eriksen future could be out of Tottenham's hands – Pochettino 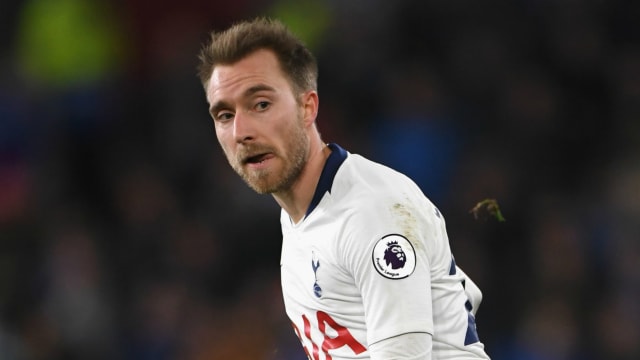 Denmark international Eriksen, 26, is a free agent at the end of next season and talks over a contract extension have reportedly stalled.

Barcelona and Real Madrid are considered the frontrunners should he decide to leave London.

Eriksen has blossomed into one of the Premier League's most influential players since arriving from Ajax in 2013 and his departure would be seen as a significant setback for Tottenham.

"I'm not a person that suffers too much in this sort of situation," Pochettino told a news conference.

"Football is dynamic; it's about interests the manager sometimes can't manage.

"Of course, Christian Eriksen is so important for us. As a manager you would like to have this type of player with you, but in the end it's a negotiation.

"It would be fantastic if Christian commits with the club for a long time. If not, it's his right to do what he wants to do.

"He is happy here, he is showing his commitment. Then, what is going to happen between him and the club is not only in our hands."

@ChrisEriksen8 has scored 19 goals from outside the box in the @premierleague - more than any other player in the competition since his debut in September 2013. #COYSpic.twitter.com/rOctFfHBTU

Fellow midfielder Mousa Dembele has long been linked with an exit and appears far from certain to see out the season with Spurs.

Dembele, sidelined since November by an ankle injury, returned to training alongside Jan Vertonghen (thigh) on Thursday, but Pochettino was unable to guarantee the 31-year-old would remain at the club beyond the end of the January transfer window.

"I don't know," the Argentine said. "That is going to be a club decision, of course involved with the player and the people that are with him.

Dembele and Vertonghen will both miss Spurs' FA Cup clash with Tranmere Rovers on Friday as they work towards full fitness, while Erik Lamela is to sit out through illness.