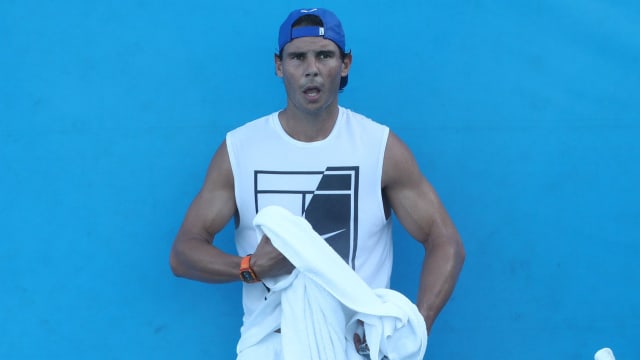 Rafael Nadal insists his Brisbane International withdrawal will not have a detrimental effect on his challenge for glory at the Australian Open.

On Wednesday, the Spaniard confirmed he was pulling out of the ATP 250 event in Brisbane due to a small strain in his left thigh.

It is far from an ideal start to 2019 for the 17-time major champion, with the first grand slam of the year set to get under way in less than two weeks.

But Nadal believes he has the know-how to manage his game - even in the absence of significant time on court.

After withdrawing from #BrisbaneTennis, Rafael Nadal says he can't thank his fans enough for all their support: "I know it's tough. ... I can't thank enough the people who support me in my career -- especially the tough moments." pic.twitter.com/s2b6oG7I88

"My hope is to win the Australian Open, that's the hope always," he told a media conference. "I feel myself playing well, at a good level of tennis.

"I have experience, I have knowledge of these things happening. If that happens to me 10 years ago I probably tell you my chances are much less, because before I felt I needed matches and to be on rhythm to compete on a good level.

"That's not the situation today. I showed I can play very well without competing for a while."

Nadal was one of three high-profile names to exit the tournament on Wednesday, as Andy Murray and defending champion Nick Kyrgios also bowed out.

Murray, having missed large chunks of 2018 following hip surgery, looked rusty and was beaten 7-5 6-2 in the second round by Daniil Medvedev, while Kyrgios claimed the first set but was sent packing by Jeremy Chardy, 6-7 (5-7) 6-2 6-3.

Andy Murray says he felt like Medvedev served really well, but that he felt good in his movement. Lost his way from end of first set to midway through second#BrisbaneTennispic.twitter.com/oZTU2Nu9za

Grigor Dimitrov and Kei Nishikori will meet in the last eight after respective straight-sets wins over John Millman and Denis Kudla, while Alex De Minaur prevailed 6-4 6-2 in an all-Aussie clash with Jordan Thompson.