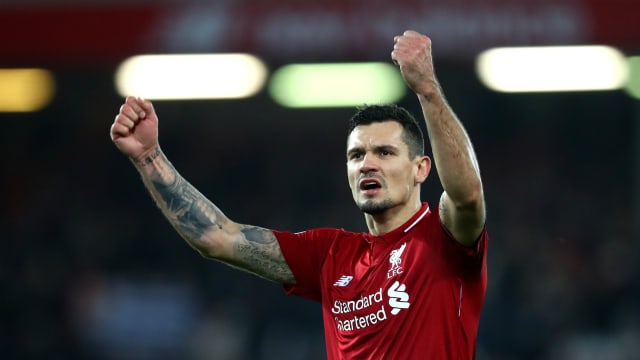 Dejan Lovren expects luck to play a part when Liverpool head to champions Manchester City in a massive match for the Premier League's title race.

Unbeaten Liverpool go to the Etihad Stadium on Thursday with a six-point cushion from nearest rivals Tottenham, with City a point further back following shock losses to Crystal Palace and Leicester City during a difficult December.

Liverpool can take a major step towards a first title since the foundation of the Premier League by defeating the reigning champions, who will give a late fitness test to Kevin De Bruyne.

And centre-back Lovren has made clear Jurgen Klopp's side will not take a cautious approach against Pep Guardiola's men, even if a draw works in their favour.

"We are a team who always wants to win," Lovren told Liverpool's official website. "Is it possible to win? It is if you are in the right mood, with the right attitude to battle on every corner of the pitch, and defend quite well.

"With all of that you need to have the luck, but Manchester City will not say: 'Take the three points.' It doesn't go like that and it will be a massive game for both teams.

"When we need to defend, we will defend; when we have the ball, we will have the ball. Everything depends on the situation at that moment. Last year we were 1-0 down in the Champions League against City but we managed to come back.

"We kept our nerves and again it will be a big challenge for us. We don't know what we can expect but we are ready for everything."

Another big month ahead. pic.twitter.com/SLkHymd8Dm

City's stumbles have led to claims the title is now Liverpool's to lose, but Lovren feels City have enough quality to bounce back despite the Reds being unbeaten in the last four competitive fixtures between the sides.

"It's Manchester City and you need to respect them, especially with what they achieved last year," Lovren added. "They broke a record with the points and it's so tough in the Premier League to win almost every game and to stay unbeaten.

"It will be a big challenge for us but we are ready for it. We played many times against them last year, they know us and we know them, so it will be a massive game, enjoyable to watch, enjoyable to play and let's see who will win."

Is @debruynekev ready to rock?
Can we close the gap? #PEPTALK with @marathonbet#mancitypic.twitter.com/KEs3Y9QuF9

City returned to form with a 3-1 defeat of Southampton last time out, despite De Bruyne's absence, and midfielder Ilkay Gundogan says his side are ready to bounce back in the title race against Liverpool.

"It's the most attractive game of the Premier League, so we want to perform well," Gundogan told SID. "Our manager's philosophy is to bring our own game on the pitch, the result will then come automatically.

"Especially after the bad results recently, we as a collective have to be more settled in the defence and attack more aggressively. Sometimes we made it too easy for our opponents to go through and we left them too many open spaces.

"Especially against Liverpool, that's an extremely exciting and a very big challenge against their three men up front. If we will be able to do that better then we'll win the game. Up front we always have the quality to score goals.

"You only have to look at their conceded goals to know that they do well defensively. They always make much effort, run very much, especially their defensive line but also the three midfielders. The three men up front sometimes even can relax a bit because of that.

"They punish mistakes in the opponent's build-up-play like hardly any other team in the world does."