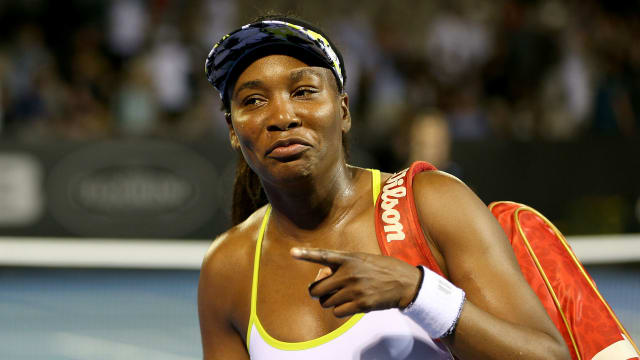 Venus Williams prevailed in a first-round thriller against Victoria Azarenka at the Auckland Open, while Jelena Ostapenko started 2019 with a shock Shenzhen Open thrashing.

Williams showed she still has plenty of staying power at the age of 38, seeing off fellow former world number one Azarenka 6-3 1-6 6-3 in Auckland on New Year's Day.

The seven-time grand slam singles champion came from a break down to advance at the ASB Tennis Centre, winning four games in a row to send Azarenka crashing out.

"Tonight was not easy, maybe one of the toughest first rounds I've ever played," the American said. "She has the experience, and for the first match of the year... my goal was to get past this first round, and we need these matches going into the Australian [Open].

"I'm hoping that the next round will be fruitful for me, and I already got a goal for 2019."

Defending champion Julia Goerges cruised to a 6-0 6-4 win over Johanna Larsson, while Hsieh Su-wei, Barbora Strycova and Kirsten Flipkens were the other seeds to make a winning start to the year.

Ostapenko's opening match of the season was over in just 51 minutes, Monica Niculescu hammering the 2017 French Open champion 6-0 6-2.

The 99-ranked Niculescu benefited from 35 unforced errors from the fourth seed, who could only muster 10 winners in a performance to forget.

Anastasia Pavlyuchenkova also bowed out in China, losing 6-2 1-6 6-2 in an all-Russian second-round encounter with Veronika Kudermetova.

Sorana Cirstea beat Pauline Parmentier 6-2 6-2 to reach the third round, while Vera Zvonareva and Alison Riske were also second-round winners.