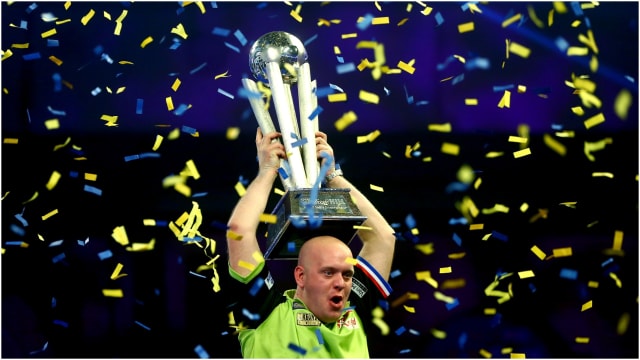 Michael van Gerwen labelled his PDC World Darts Championship triumph as a "phenomenal" end to what he accepted was a below-par season.

Van Gerwen easily claimed his third world title with a 7-3 triumph over underdog Michael Smith at the Alexandra Palace on New Year's Day.

The Dutchman did not have to be at his best to beat a profligate Smith and Van Gerwen's inability to find top form was fitting given his inconsistency in 2018.

He won the Masters and the Premier League as well as the World Grand Prix but lost in the first round of the World Matchplay.

Yet a somewhat unconvincing display on this occasion did not dampen the delight for the world number one.

"This is the best feeling you can have," he told Sky Sports. "I have worked for this so long and everyone knows I've had a difficult year.

"I've played good but I haven't performed as well as I could have done so to win this trophy it's phenomenal. This means a lot to me."

Michael van Gerwen just taking a call from the Prime Minister of The Netherlands.... as you do. pic.twitter.com/GriiBW9LQv

Smith was not expected to trouble Van Gerwen and, save for two sets in which he responded brilliantly to going 4-0 behind, an inability to hit doubles prevented him from doing so.

Van Gerwen and Smith will each form part of the Premier League line-up for 2019, with the former's title defence starting next month.