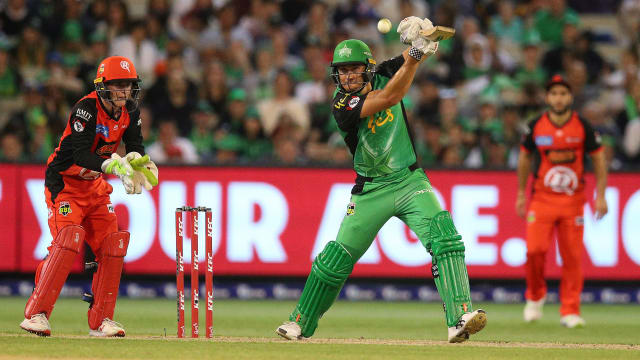 Marcus Stoinis bludgeoned an unbeaten half-century and Dwayne Bravo returned to haunt Melbourne Renegades in a seven-wicket derby victory for Melbourne Stars at the MCG on New Year's Day.

The Stars have now won 10 out of 14 Big Bash League encounters with their city rivals after sealing back-to-back victories at a canter.

All-rounder Bravo started 2019 on a high note against his former team, taking 3-27 from his four overs as the Renegades were restricted to 148-9.

Stoinis (2-26) also impressed with the ball after Sam Harper and Mackenzie Harvey put on 52 for the first wicket from just five overs and then gave the Australia selectors another reminder of his prowess with the bat.

He finished 78 not out from only 49 balls after hitting four sixes and as many fours opening the batting, hooking Kane Richardson over the ropes to secure a comfortable win with 13 balls to spare.

Ben Dunk (32) and captain Glenn Maxwell (33) provided support, with Cameron Boyce's 2-23 unable to prevent the Renegades from suffering a second defeat from four.

Sealed with a six! The Stars cruise home at the 'G to improve their record to 2-2 for the season.

Harper and Harvey got the Renegades off to a flyer after they were put in by Maxwell, but the innings fizzled out following a promising start.

Stoinis went for 14 from his first over but got the breakthrough from the final ball when Maxwell darted back from inside the circle to catch Harvey (21) impressively.

Adam Zampa saw the back of Harper for 30 in the next over and the wickets tumbled all too regularly from then on.

The Renegades must have been fearing Bravo would rise to the occasion and the West Indian removed Cameron White (8), Dan Christian (32) and Boyce to leave the Renegades short of posting a challenging target.

Richardson has made a great start to the tournament but the Renegades seamer suffered a derby to forget.

He took his tally of wickets to eight from three matches with 3-22 in the win over Sydney Sixers last time out but failed to fire against the Renegades.

Richardson's 3.5 overs went for 39 runs, Stoinis putting him out of his misery with a big blow to end a one-sided contest.

STOINIS FINISHES WHAT HE STARTED

Stoinis had made a disappointing start to the BBL but was unsurprisingly named man of the match after following up his exploits with the ball by taking his chance at the top of the order.

He found the boundary twice in the first over of the run chase, bowled by Mohammad Nabi, and continued to tick along at over a run-a-ball.

Stoinis and Maxwell both cleared the ropes in an 11th over from Christian which went for 18 and the former brought up his half-century from only 35 balls.

The Renegades were unable to see the back of Stoinis, who played enterprising strokes on both sides of the wicket in a high-quality knock.