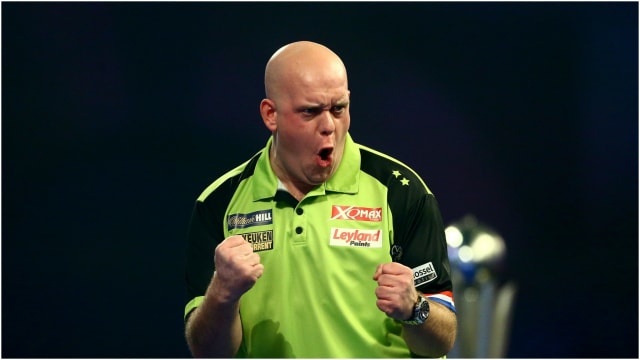 World number one and top seed Van Gerwen was dominant throughout in London he eased to a 7-3 victory over a 10th seed making his first appearance in the final.

The magnitude of the occasion clearly affected Smith, who struggled to hit finishes as Van Gerwen raced into a 4-0 lead.

Smith found the form that saw him reach this stage to interrupt the Dutchman's dominance and cut the deficit to 4-2. It was only brief respite for the Englishman, though, Van Gerwen stemming the tide and delivering in the key legs to take the next three sets and clinch his third world title.

Van Gerwen was upset by 2018 champion Rob Cross at the semi-final stage last time around but a similar turn of events never looked on the cards in this New Year's Day showpiece. He took the opener despite missing three set darts and an unconvincing second-set performance went unpunished as Smith missed two shots at double 10.

It was Van Gerwen's brilliance rather than Smith's struggles that made it 3-0 as he continued the surge with a 14-dart break of throw, and more profligacy from the home hope aided his cause in the fourth.

The two players combined to miss six consecutive doubles, with double 12 Smith's nemesis this time around, before Van Gerwen finally converted and moved within three sets of victory.

That was when the tide turned, though, as Smith hit an excellent checkout of 124 to avoid a whitewash, before then hitting back-to-back bullseye finishes and then double top to win a sixth set in which he averaged 110.

Van Gerwen reassumed control in the seventh despite more pressure from Smith, for whom the writing was on the wall when he failed to take advantage of his opponent missing a double finish in the eighth.

He did succeed in delaying the inevitable to make it 6-3 but Van Gerwen refused to be frustrated any longer and hit double 16 to make the Sid Waddell Trophy his once more.