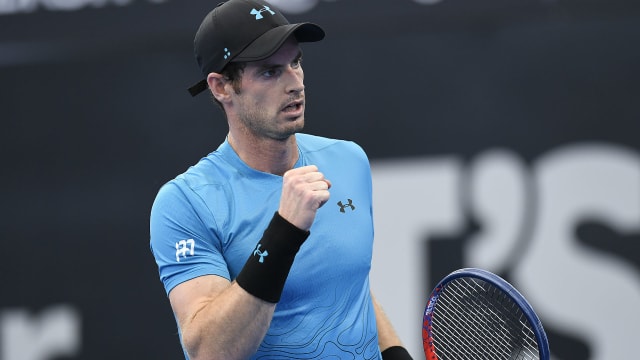 Andy Murray made a winning return to action at the Brisbane International on Tuesday, while Nick Kyrgios fired 44 aces on his way to beating Ryan Harrison.

Murray missed most of last season with a hip problem and had spoken recently of still feeling some pain.

But the Scot impressed on his ATP Tour comeback, getting the better of Australian wildcard James Duckworth 6-3 6-4 in the first round to set up a clash with fourth seed Daniil Medvedev.

"I thought I did quite well," said Murray. "I think maybe both of us at the beginning of the match were a bit nervous, a few errors from the back of the court from both of us.

"But I think as the match went on, the rallies were a bit more entertaining. I think for the first match of the new year after quite a long break, it was alright."

When you remember that luther season 5 is starting today... Nice to get the first win of the new year @brisbanetennis today...2nd round tomorrow night.. Let's fire it up #luther #tennis #newyear #pantsdown

"I don't think [I can serve more aces in three sets]," said Kyrgios. "I needed every single one of them."

Kyrgios will meet Jeremy Chardy in the second round after the Frenchman came from behind to beat Jan-Lennard Struff, while Jo-Wilfried Tsonga set up a second-round clash with top seed Rafael Nadal by winning 7-6 (8-6) 6-4 against Thanasi Kokkinakis.