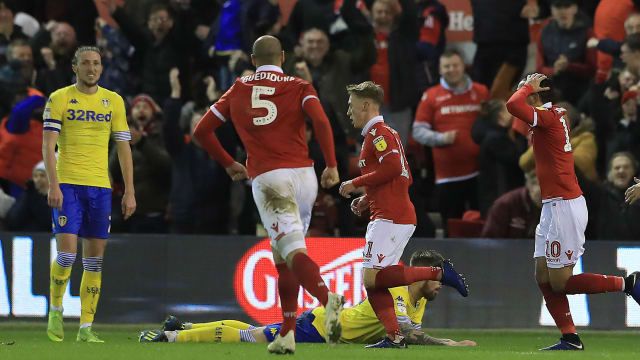 Norwich City rescued a late 1-1 draw at Brentford to edge closer to Championship leaders Leeds United, who were beaten 4-2 by Nottingham Forest.

Sheffield United closed in on the top two thanks to their 3-0 win at Wigan Athletic, but no one else in the top six was able to win – Derby County were held at home 1-1 by fellow high-flyers Middlesbrough, while West Brom lost 2-1 to Blackburn Rovers.

Rock-bottom Ipswich Town continue to look doomed as they went down 3-2 at home to Millwall, while Rotherham United's 2-1 triumph over Preston North End saw them climb out of the bottom three at the expense of Bolton Wanderers, who were crushed 6-0 by Hull City.

Tammy Abraham continued his good form with another couple of goals in Aston Villa's entertaining 2-2 draw with QPR, Sheffield Wednesday were held by Birmingham City and Bristol City left Stoke City with a 2-0 win.

Leeds suffered a second successive Championship defeat, as Nottingham Forest came out on top in a thriller at the City Ground.

It was by no means the ideal start for Leeds, as Jack Colback rounded goalkeeper Baily Peacock-Farrell to give the hosts an early lead.

Things got worse for the visitors just before the break when they lost Kalvin Phillips to a red card for a woeful tackle on Adlene Guedioura, but Jack Clarke had a swift impact when introduced at the interval with a clinical finish to equalise, and Ezgjan Alioski smashed in from close range in the 64th minute to put Leeds in front.

Yet the 10 men were unable to maintain their intensity and Forest rallied as Colback levelled, before Daryl Murphy and Ben Osborn netted in the final 18 minutes to ease the pressure on Forest boss Aitor Karanka.

Report and reaction to follow from The City Ground... pic.twitter.com/XhFnkz0Ruw

Timm Klose was Norwich's late hero as the Swiss defender scored a late equaliser to move the Canaries a point closer to Leeds.

Julian Jeanvier put Brentford ahead in the 22nd minute, beating Tim Krul from a corner.

It looked like Norwich were heading for defeat, though the leveller did arrive eventually seven minutes from time, as Klose nodded Mario Vrancic's corner home to move Daniel Farke's men two points behind Leeds.

The lads dig in to earn a point! #ncfcpic.twitter.com/nADUH9461y

Swansea endured a pretty poor time over the Christmas period with two defeats and a draw, but a visit to struggling Reading proved the perfect tonic.

They were ahead after just two minutes as Oliver McBurnie headed in Kyle Naughton's cross.

Connor Roberts doubled their lead with half an hour played, stabbing in from close range following Leroy Fer's teasing delivery, and Mike van der Hoorn nodded in their third on the stroke of half-time.

A foul on Wayne Routledge allowed McBurnie to get his second – and 10th of the season – from the penalty spot early in the second half, before Callum Harriott got a late consolation for the hosts.

#HappyNewYear The #Swans dominate at the Madejski to take their first win of with goals from @oli_mcburnie (2), @ConnorRobs & @mikevdhoorn1.

It was a day to forget for Bolton Wanderers manager Phil Parkinson on his return to Hull, whom he managed in 2006.

Kamil Grosicki ensured it was 1-0 at the break and Hull blew their visitors away in the second half, scoring five more without reply.

Evandro made it 2-0, before Grosicki got his second of the day – the two goals separated by just 81 seconds.

WHAT A WAY TO START 2019!!#hcafc | #theTigerspic.twitter.com/qDeEkyVXwm