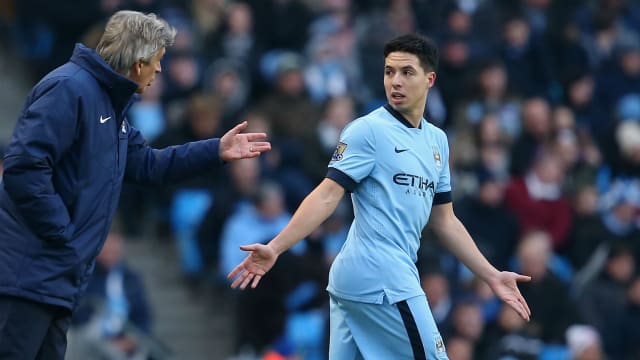 Samir Nasri has joined West Ham on a free transfer until the end of the season after finishing a doping ban, the Premier League club have announced.

Nasri had been training with the club since November and a deal had long been mooted, as the Frenchman looks to kick-start his career after a difficult spell.

The 31-year-old was given an 18-month backdated ban after receiving a drip treatment at a Los Angeles clinic in 2016 while on loan at Sevilla, and is free to play again from January 1.

UEFA said the treatment contravened rules laid down by the World Anti-Doping Agency (WADA), and an appeal against an initial six-month suspension resulted in an extension, which was backdated to July 1 2017.

Nasri last featured in a competitive match in November 2017 during a short spell with Antalyaspor in Turkey, but he is relishing the opportunity to return to England, where he has also represented Arsenal and Manchester City.

"You choose a club and a project because of the ambition, and I think that West Ham has everything to be one of the biggest clubs in London, for sure," he told the club's official website.

"I mean, 60,000 people at every game at home. We play in the Olympic Stadium. The training ground is there and you have owners who want to invest and have a good team. Everything is there to be doing great things.

"Coming back to the most competitive league in the world, with a team full of ambition with a manager that I know, it's the best job in the world, and I'm really excited about it."

Before joining Antalyaspor City, Nasri – a two-time Premier League winner – had impressed while on loan with Sevilla in Spain.

His form in Spain sparked suggestions Nasri was back to his best after never really meeting expectations at City, but Hammers boss Manuel Pellegrini – who coached him in Manchester – remains confident in the Frenchman's ability.

"I am very pleased to welcome Samir to West Ham," the Chilean added. "He is a player I obviously know well from our time together at Manchester City and I am happy to be working with him again.

"He has been working very hard here in recent weeks to build up his fitness and condition after a long period without playing, and he is now very determined to return to his best.

"Samir will give us another dimension in our attacking play. He is a very technical player, with excellent quality on the ball, and the ability to create big moments in important matches.

"He already has very good experience of the Premier League and we hope that he will have a positive impact on the team between now and the end of the season."

West Ham added via a statement on the club's official website that they have the option to extend his contract beyond the end of the season.