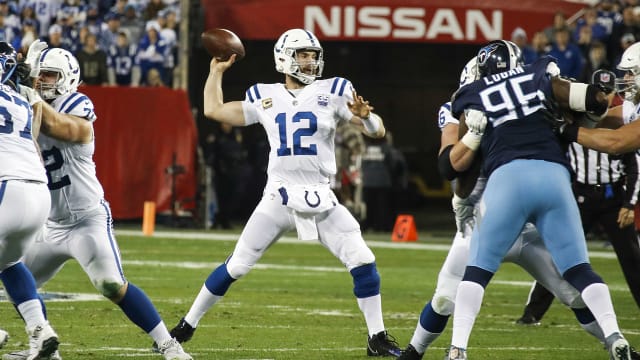 The Indianapolis Colts reached the NFL playoffs thanks to their 33-17 win against the Tennessee Titans on Sunday.

Indianapolis trumped Tennessee in the winner-takes-all affair, despite a pick-six, a fumble and key penalties.

It is the Colts' ninth win in 10 games, and they became only the third team in NFL history to make the playoffs after starting the season 1-5.

Head coach Frank Reich and his red-hot Colts (10-6) will now face the Houston Texans in on the road on Saturday.

Luck back among NFL's elite quarterbacks

Back in June 2016, Andrew Luck was on top of the NFL world, signing a six-year, $140million contract, at the time the richest deal in NFL history. But a lingering shoulder issue forced him to have surgery in early 2017, and he missed that entire 2017 season. Questions and rumours circulated about the severity of the injury and when he would return.

No one seemed to know what to expect coming into the 2018 campaign. Some observers were sceptical he would return to his previous form.

They were right — in some ways, Luck was better than ever this season, as he showed once again against the Titans. Luck completed 24-of-35 passes for 285 yards. Yes, he had a hideous pick-six in the second quarter he would like to have back, but he also connected on three touchdown passes, including this precise, roll-out strike to Dontrelle Inman to open the scoring.

Andrew Luck rolling out to his left is a thing of beauty.

A strike to @mrinman15 for the #Colts TD!

Statistically speaking, this might have been Luck's finest year. He set career highs in completion percentage and quarterback rating, and had his second-best season in terms of yards and touchdowns. The offense hummed under his leadership, leading the league in third-down conversion percentage.

If Luck can keep playing at this level against the Texans, the Colts will be a tough underdog to shake.

Underrated Colts defense could be key in the postseason

The Colts defense was a revolving door early in the season.

It is one thing to give up 38 points to the New England Patriots and 37 to the Texans, but when you give up 42 points to the New York Jets, that'is a red flag. But the Colts have progressively improved on defense as the season has gone on, and they stepped up against the Titans, as rookie linebacker Darius Leonard shows here with the pick.

All Darius Leonard does is make plays! @dsleon45#Coltspic.twitter.com/NiifLEEr5Y

The overall D stats are skewed by the disastrous first half of the season, but Indy's defense is sneaky good. It came into the day ranked in the top 10 in the NFL in rushing yards per attempt. That tighter defense deserves much of the credit for the team winning nine of their past 10 games. Leonard (who had a team-leading eight tackles and that interception Sunday) and his fellow Colts defenders are not well-known, but they could be the key for Indy in the postseason.

Where do Titans go from here?

Tennessee finished with a 9-7 record. There are some questions surrounding the team, namely, will quarterback Marcus Mariota ever get through a full season healthy? He has yet to play a full 16 games in four seasons, and watched again Sunday as Blaine Gabbert led the Titans' offense.

The Titans exercised the fifth-year option on Mariota's contract earlier this season to keep him through the 2019 campaign, but some question whether he is the long-term answer. Elsewhere on offense, running back Derrick Henry was a revelation in recent weeks, going from an above-average back to one of the most explosive power runners in the NFL. He had 93 yards rushing against the Colts, but it remains to be seen if the last few games are an aberration or the new normal for the former Heisman winner.

On defense, it is hard to find fault with a unit that ranked second in the NFL in points allowed per game (18.0) entering W\week 17. They were especially tough against the pass. But going forward, head coach Mike Vrabel and the Titans really need Mariota to stay healthy and take the next step in his development as a franchise quarterback. It would be no surprise to see this team challenge again for the AFC South title again next season.