Van Gerwen blows Anderson away to set up Smith decider 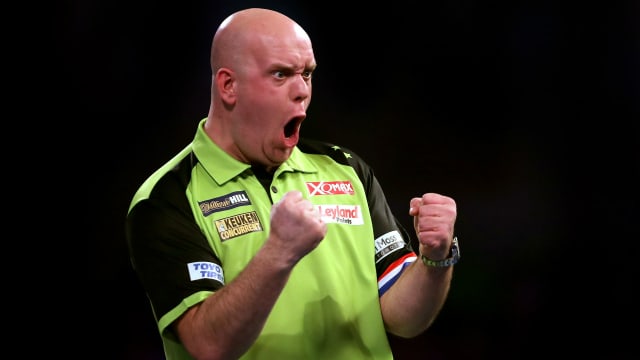 Michael van Gerwen will face Michael Smith in the PDC World Darts Championship final after a 6-1 demolition of Gary Anderson at Alexandra Palace.

World number one Van Gerwen produced a masterclass to stand on the brink of a third world title, blowing Anderson away on Sunday.

Van Gerwen breezed into a 5-0 lead and although the out-of-sorts Scotsman avoided a humiliating whitewash, he bowed out with a whimper in a semi-final which failed to live up to the hype.

The Dutchman averaged 104.76 as he stayed on course to land the Sid Waddell Trophy for a third time and land the £500,000 payday which the winner will pick up on New Year's Day.

How it feels to be one win away from the 2018/2019 @WilliamHill World Darts Champion#WHDartspic.twitter.com/FohUW7eB5s

Anderson was no match for Van Gerwen in a replay of the 2016-17 final, the favourite finishing with ruthless precision after his opponent started with a 180 before taking out 127 for the opening leg.

Van Gerwen soon took control, hitting double top with a dart to spare to take the first set 3-2 and taking complete control in a flash.

"I didn't give him any time to breathe," Van Gerwen told Sky Sports: "It means the world to me. The work is not done yet, I have to do more."

Tournament debutant Aspinall's incredible run was halted by his fellow Englishman, who averaged 105.12 and landed 17 maximums.

Smith said: "I've never felt like that ever. I'm so happy I'm in the final, I really don't know what to say. I'm one step away from living my dream."