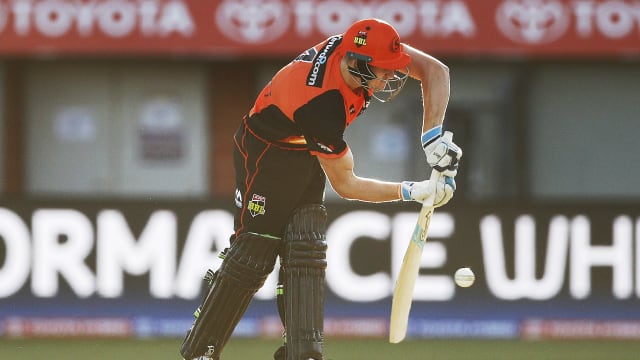 Cameron Bancroft's return to competitive professional action in Australia did not go to plan as he made just two in Perth Scorchers' six-wicket Big Bash League defeat to Hobart Hurricanes.

The Australia batsman was handed a nine-month domestic ban for his role in the ball-tampering scandal against South Africa in March.

And, despite having played grade cricket and various Twenty20 tournaments in the meantime, Bancroft's lack of match sharpness was quickly punished by the Hurricanes, who have now won four from four this season.

THROWN IN AT THE DEEP END

Bancroft must have known there would be no gentle reintroduction against the Hurricanes, but this return was particularly tough.

We welcome back Cam Bancroft as he makes his return to the team following his ban It’s been a long year for Cam and now he can move forward and get back to playing cricket at a high level Let's do this boys! #MADETOUGHpic.twitter.com/vRlLhpV8m6

The 26-year-old made two from his first delivery, but that was as good as it got. He edged the dangerous Riley Meredith (3-15) behind and swiftly departed to applause from the opposing supporters.

The Scorchers belatedly put up a fight but had made just 32-4 by the end of the powerplay and Hobart continued to tally wickets at a steady rate.

A partnership of 46 between Hilton Cartwright (29) and Ashton Agar (32) at least bumped the score up a little, while there was some belated big hitting from Nathan Coulter-Nile (20) before he went to Meredith from the final ball of the innings.

Short set the tone for further Perth misery with two boundaries in the opening over of the Hurricanes innings and he and Wade reached the end of the powerplay with their wickets still intact on 41.

Bancroft, keeping for the Scorchers, was able to contribute as he dived at full stretch to catch a Wade top edge, but Hobart were undeterred and kept chipping away at their target.

A big wicket for the Scorchers, but they're going to need plenty more! #BBL08pic.twitter.com/rUoWtjk8r2

Doolan picked up the baton and a pair of Agar (2-19) wickets - including the departure of star man Short, smashing to Cartwright - came too late to disrupt the home side.

The Hurricanes completed the job with Doolan and Simon Milenko (3 not out) in the middle, and 15 balls and six wickets remaining.