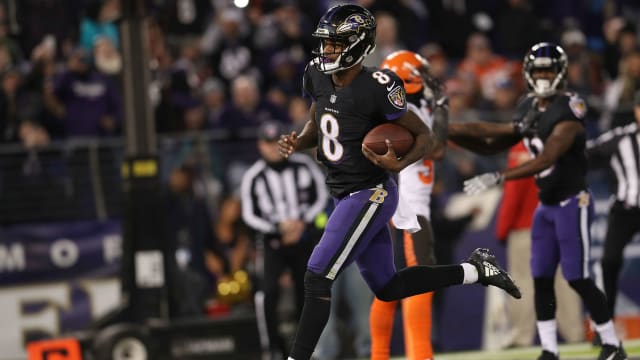 The Baltimore Ravens went from possible NFL playoff elimination in week 16 to AFC North champions a week later after defeating the Cleveland Browns.

Baltimore waited until literally the last minute to complete a 26-24 win over Cleveland and wrap up the AFC North on Sunday.

The victory effectively knocked the Pittsburgh Steelers (9-6-1) out of the playoffs. Pittsburgh can still make the postseason if the Indianapolis Colts and Tennessee Titans tie in the Sunday night game.

Baltimore required a win to take the division title, while Pittsburgh needed to defeat the Cincinnati Bengals – which they did 16-13 – and a Ravens loss to claim the honours.

Kings of the North. pic.twitter.com/ol5aZgEPm3

So, after the Steelers won their game at Heinz Field, they remained on the field and fans stayed in the stands to watch the conclusion of the Ravens-Browns game.

Baltimore appeared to have the game in hand with a nine-point lead and less than four minutes to play, but Browns quarterback Baker Mayfield led a nine-play, 75-yard touchdown drive to make it a one-possession game.

After the Browns stopped the Ravens on defense, Mayfield led Cleveland downfield near field-goal range before linebacker C.J. Mosley intercepted him on fourth-and-10 with just over a minute remaining to seal the victory.

The moment we knew we were DIVISION CHAMPS. pic.twitter.com/o6LPGraqCo

It was Baltimore's fifth AFC North title, but first since 2012. The Ravens won their second Super Bowl that season.

Lamar Jackson showed why the Ravens have committed to him as their quarterback of the future. He passed for 179 yards, and rushed for 90 more, with two touchdowns. Kenneth Dixon added 117 yards on the ground.