I missed you! - Thompson welcomes back shooting hand 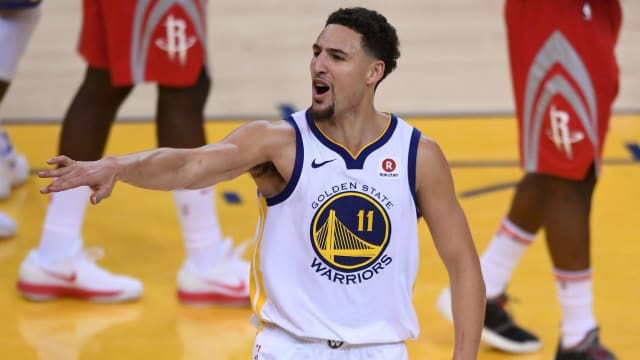 Klay Thompson was always confident that he would return to form as he led the Golden State Warriors to victory at the Portland Trail Blazers.

The Warriors shooting guard had not scored more than 20 points in a game since December 14, contributing just five in a dismal defeat to the Los Angeles Lakers on Christmas Day, but he was back to his best at the Moda Center.

Thompson put up 32 points in a 115-105 road win and was caught on camera telling his right shooting hand: "I missed you!"

He now hopes to "get on a great roll".

Asked to explain the gesture afterwards, Thompson said: "It was just, 'I missed you - it's good to see you again'. It's been a five-game absence or so where he hasn't been the same.

"So to finally see the ball go in at a high rate felt really good. I will just keep being aggressive and hopefully get on a great roll from here."

He added to NBC Sports: "It's an 82-game season and I pride myself on being that [one of the NBA's best shooters] every night.

"If you have a four- or five-game stretch, you can't get down on yourself in the regular season. We've always come out on top, so I never get discouraged just because I'm missing shots. I keep plugging away."

"It's Klay," the forward said. "He's a great shooter, one of the greatest shooters we've ever seen. He's not going to slump forever."