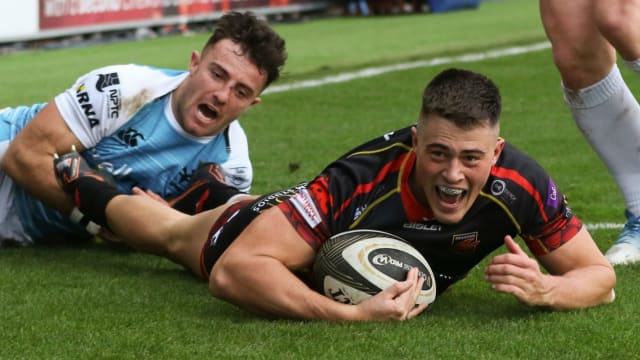 The struggling Dragons ended a four-year wait for a derby win over the Ospreys with a 23-22 triumph at Rodney Parade on Sunday.

Dragons fans had not celebrated a victory over their rivals since Boxing Day 2014, but will head into 2019 on a high after Jason Tovey settled a tense encounter with a penalty six minutes from time.

Sam Davies had a chance to deny the Dragons a first win under caretaker coach Ceri Jones - who stepped in following Bernard Jackman's departure this month - but was off target from the tee right at the end.

Jared Rosser scored the only try of the first half with a brilliant solo effort and the home side led 13-6 at the break, with Josh Lewis booting eight points.

Elliot Dee's converted try gave the Dragons an 11-point lead, but Justin Tipuric went over and Davies took his tally with the boot to 17 points to put the Ospreys in front.

Tovey held his nerve to win it late on, though, with Davies unable to deny the Dragons only a fourth Pro14 win of the season, which moves them six points ahead of bottom side Southern Kings in Conference B.

They've done it! @dragonsrugby have their first derby win over @ospreys since Boxing Day 2014 after a nail biting 23-22 victory. #GuinnessPRO14#DRAvOSPpic.twitter.com/QdljEC72uI