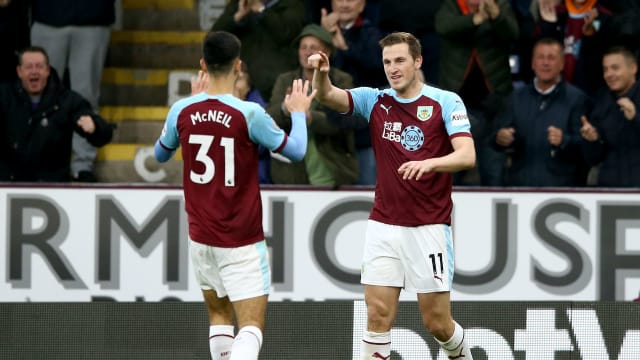 Burnley claimed a vital win in their bid to escape the Premier League relegation zone as goals from Chris Wood and Dwight McNeil saw off West Ham 2-0.

Following three successive defeats, including a 5-1 loss to Everton last time out, goalkeeper Joe Hart took the hit for Burnley's torrid form, with Tom Heaton coming in for a first Premier League start since September 2017.

And that change paid dividends, with Burnley's solid foundation setting the stage for Wood to open the scoring 15 minutes in before McNeil netted his first goal for the club.

Wood and Ashley Barnes wasted gilt-edged opportunities to wrap up the points, but their misses did not prove costly as the Clarets eased some of the mounting pressure on Sean Dyche.

Burnley could have been ahead early on had Barnes kept his cool from McNeil's cutback, before Heaton was called into action by Angelo Ogbonna's header.

Heaton played his part in Burnley's opener, heading the ball into Ashley Westwood who picked out Ashley Barnes, with Wood on hand to hammer home from his strike partner's knock down.

Burnley had their second in the 34th minute, McNeil volleying in from Westwood's cross, before squandering the chance to double his tally by drilling wide from close range.

The Clarets should have put the game to bed after the restart, but Wood flapped at a simple finish while Lukasz Fabianski pulled off a wonderful save to deny Barnes.

Fabianski was beaten moments later, only for Wood to drill wide of a gaping goal, although it was Heaton who would have the final say, making a brilliant stop to tip Andy Carroll's header onto the crossbar and ensure there would be no grandstand finish.

What does it mean? Burnley claw back some ground

Dyche's side remain in the relegation places, but are now level on points with Southampton, who were beaten by Manchester City, and will be full of confidence heading into a massive clash with Huddersfield Town. West Ham, meanwhile, end December on a dismal note and in the bottom half, although Manuel Pellegrini can be satisfied with a haul of 15 points from 21 on offer.

Burnley's striker has struggled this season, but having scored his only Premier League goal of the season against the Hammers in November, Wood finally got himself back on the scoresheet with his fifth goal in four top-flight games against West Ham, and he could easily have had a hat-trick.

No way back for Hart?

Hart has arguably been Burnley's most consistent performer this term, but Heaton's reinstatement to the team seemed to settle the hosts' defence, and that wonderful late stop from Carroll's header may mean that the former Manchester City goalkeeper is set for a spell on the bench.

A huge bottom-of-the-table encounter kicks things off for Burnley in 2019, as they take on lowly Huddersfield. West Ham, meanwhile, host Brighton and Hove Albion.