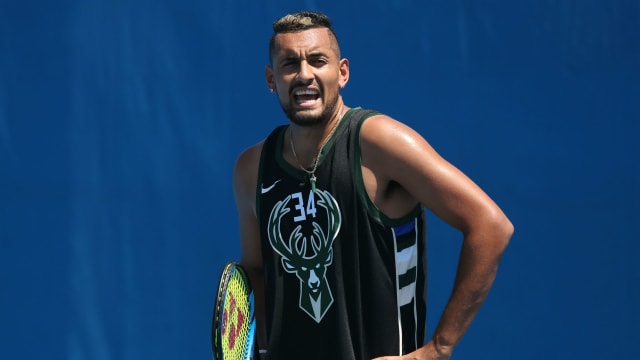 Nick Kyrgios has suggested he will take a break from tennis for the rest of the year if he wins the Australian Open.

The 23-year-old is preparing to defend the Brisbane International title he won back in January, with the first major of 2019 set to begin soon afterwards.

Kyrgios' best performances at any grand slam came via runs to the last eight at Wimbledon 2014 and in Melbourne in 2015, while he has attracted headlines for a number of controversial moments throughout his fledgling career.

And ahead of getting his 2019 season under way, Kyrgios hinted he was looking to reduce his workload over the next 12 months.

"I play enough tennis during the year, I'm sick of it by the time I get home," said Kyrgios, who later posted a link to his quotes on Twitter alongside the caption "Lemme troll some more" and a crying with laughter emoji.

"I was away from home for five and a half months and I don't really ever want to do that again.

"I'm going to play a very light schedule this year. If I was to win the Aus Open or something... I probably wouldn't play for the rest of the year."

Kyrgios starts his Brisbane defence against Ryan Harrison in the first round, but the Australian is not expecting to be on top form.

"I'll probably be rusty... I wouldn't be surprised if I went out there and had 30 unforced errors... it doesn't matter to me," he said.