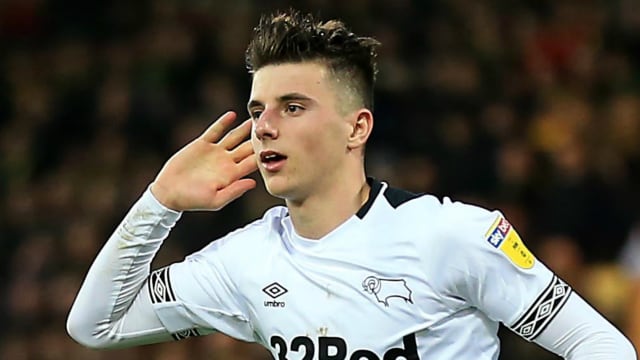 Marcelo Bielsa's Leeds team went into their clash with Hull City on the back of seven consecutive wins but goals either side of half-time from Jarrod Bowen earned the Tigers a deserved victory at Elland Road.

Norwich might have hoped for a quieter afternoon following their dramatic 3-3 draw with Nottingham Forest on Boxing Day, but they were involved in another feast of goals as Jack Marriott's stoppage-time strike gave Derby County a 4-3 win at Carrow Road.

Elsewhere there were victories for Middlesbrough, who beat Ipswich Town 2-0, and Sheffield United, who cruised to a 3-0 triumph over Blackburn Rovers.

The pressure on Forest manager Aitor Karanka ramped up after his side slipped to 1-0 defeat at Millwall, while Bristol City moved towards the top six by overcoming Rotherham United 1-0.

Having come back from three goals down to snatch a draw against Forest, Daniel Farke's Norwich raced into a 2-0 lead inside the opening 31 minutes against Derby courtesy of strikes by Ben Godfrey and Teemu Pukki.

But Derby drew level before the interval through goals from Fikayo Tomori and Mason Mount, teeing up a thrilling second half between two of the Championship's best attacking sides.

Pukki pounced on a scuffed Onel Hernandez shot to restore Norwich's lead before a floodlight failure delayed the match by 20 minutes.

When the lights came back on, Derby's Florian Jozefzoon scored from close range to restore parity and Marriott chipped City goalkeeper Tim Krul at the death to seal a first win in four for Frank Lampard's men.

Frank Lampard has arrived for his post-match press conference...

"We deserved to win on the sheer desire we showed. We displayed incredible character." pic.twitter.com/eodxgetcUC

Leeds' recent habit of coming from behind to win ended abruptly as they failed to bounce back from two Bowen goals and suffered their first Championship defeat since November.

Nigel Adkins' side poured forward from the outset and the hosts' defence, still missing captain Liam Cooper, was lost at sea as Bowen swept home Hull's first after 25 minutes.

The Tigers sat back and absorbed waves of pressure before a fast break in the second half saw Leeds goalkeeper Bailey Peacock-Farrell parry the ball straight to the feet of Bowen, who smashed home.

Leeds rallied late on - substitute Tyler Roberts giving them a lift - but when the full-time whistle blew they looked very much like a side that had run out of steam following an impressive run of form.

WHAT A WIN! The Tigers make it four wins on the bounce at Elland Road!!#hcafc | #theTigerspic.twitter.com/zZzMR45SrH

LIONS CRANK UP THE HEAT ON KARANKA

Ryan Tunnicliffe's second goal of the season clinched back-to-back victories for Millwall, who beat Forest 1-0 at The Den and left their visitors winless in five matches.

Forest are 10th in the Championship but the impressive form that saw them lose only twice in the league before December has given way to a torrid sequence.

Tunnicliffe scored with an overhead kick after nine minutes, before Millwall keeper Jordan Archer made a good save from Joe Lolley to secure three valuable points for the Lions in their bid to move away from the relegation zone.

Not a bad way to finish 2018, @RyanTunnicliffe!#Millwallpic.twitter.com/zXQJLoBkje