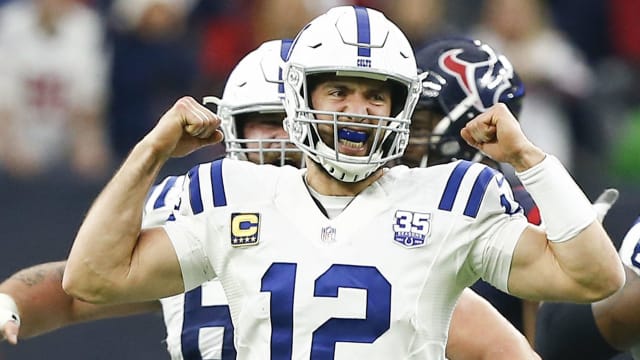 Three playoff spots remain up the grabs in the NFL as the 2018 regular season reaches its conclusion this weekend.

The Indianapolis Colts will be playing January football if they beat the Tennessee Titans, who will make the post-season if they can finally beat an Andrew Luck-led team at the 11th time of asking.

Five of the six playoff places in the NFC have been confirmed, with the Minnesota Vikings and Philadelphia Eagles battling it out for the final berth, while either the Baltimore Ravens or Pittsburgh Steelers will be confirmed as AFC North champions, depending on how they fare against the Cleveland Browns and Cincinnati Bengals respectively.

Here we take a look at Sunday's slate with the help of Opta.

Homefield advantage in the playoffs will be key to New England if they can secure it, with the Patriots aiming to go 8-0 at Foxboro in the regular season for the seventh time since 2000. Running back Sony Michel is 119 rushing yards away from becoming the first Pats rookie to reach 1,000 since Robert Edwards managed the feat in 1998.

The only  to win straight.

First-round pick Bradley Chubb is having a fine season opposite Von Miller and the Denver pass rusher is three sacks away from reaching 15 and breaking the rookie record set by Jevon Kearse in 1999. Meanwhile, Chargers wideout Keenan Allen will become the first player in franchise history to record back-to-back seasons with at least 100 catches if he makes seven more receptions.

The two young quarterbacks in this contest have personal milestones in their sights. Ravens signal caller Lamar Jackson will have accrued the second most rushing yards by a rookie QB if he reaches 102 yards on the ground, while Cleveland's Baker Mayfield needs three more passing scores to reach 27 for the season and set the NFL record for a rookie.

Fresh from moving above Eric Dickerson on the all-time rushing list, Washington Redskins running back Adrian Peterson requires one more score on the ground to move past Jim Brown into fifth in the all-time list. Zach Ertz also made history last week - setting the single-season receptions record for a tight end - and a sixth 100-yard receiving game would see him equal the record for such games among his position group.

No team has recorded more interceptions than the Chicago Bears, who are three picks away from becoming the first team since the 2011 Green Bay Packers to record 30 in a season. For Minnesota, quarterback Kirk Cousins needs to toss just one more touchdown to reach 30 and set his career-high for a campaign.

Steelers quarterback Ben Roethlisberger is 111 passing yards away from a new career high and 158 short of becoming the first Pittsburgh signal caller to amass 5,000 in a season. Pittsburgh have won their last six games against the Bengals - the longest streak since they reeled off eight victories in a row between November 1991 and December 1994.

Luck is aiming to become the first quarterback to go 11-0 against an opponent having won his previous 10 games against the Titans. Should Luck throw four touchdowns on Sunday, he would reach 40 for the season and become just the fifth player in NFL history to achieve that haul in multiple campaigns. That club currently features Peyton Manning, Drew Brees, Aaron Rodgers and Dan Marino.