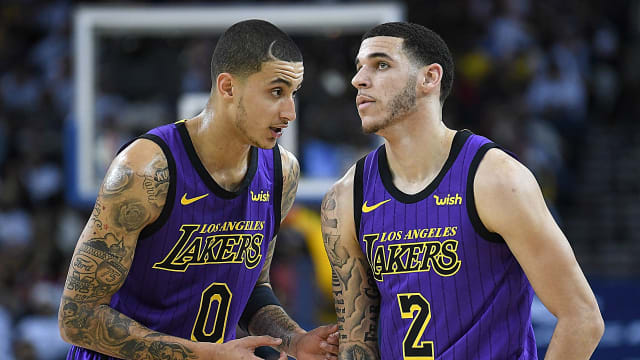 The Sacramento Kings reigned supreme with a 117-116 victory over the Los Angeles Lakers thanks to Bogdan Bogdanovic's buzzer-beater.

In the Lakers' first game without LeBron James – who is sidelined with a groin injury – Bogdanovic stepped up for the Kings and drilled a three-pointer as time expired to seal Thursday's NBA win.

Bogdanovic came off the bench to lead all Kings players with 23 points.

Bogdan Bogdanovic steps back for the #TissotBuzzerBeater! #ThisIsYourTimepic.twitter.com/6EcVYHBSsb

James Harden is the reigning league MVP, and he is making his case for a second campaign. The NBA star scored 45 points, marking the sixth game in a row he has scored 35 points or more as the Houston Rockets topped the Boston Celtics 127-113. Harden also made nine three-pointers, which tied his career-high.

Ben Simmons posted his fifth triple-double of the season in the Philadelphia 76ers' 114-97 victory at the Utah Jazz. The Australian finished with 13 points, 14 rebounds and 12 assists.

Age just a number for Korver

Jazz veteran Kyle Korver may be 37, but he can still shoot threes like he did in his younger years. Korver sank this beauty right before the shot clock ran out at the end of the first quarter.

Kyle Korver drills it to beat the shot clock buzzer!

The Denver Nuggets will travel to the San Antonio Spurs for the two team's first matchup of the season. The surging Spurs have won seven of their last 10 games, while the Nuggets are half a game behind the Warriors in the Western Conference. Denver will be looking to shake off a tough loss against the Los Angeles Clippers, which saw Nikola Jokic ejected, while the Spurs will try to bounce back from a loss against the Rockets. It will be a clash between two Western Conference teams that look poised for the postseason.