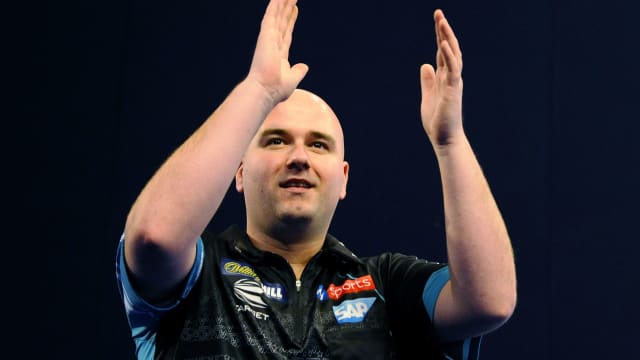 Luke Humphries sensationally claimed the scalp of defending champion Rob Cross with a stunning fightback in the last 16 of the PDC World Championship on Friday.

Cross upset Phil Taylor at Alexandra Palace in the previous edition, but he was on the end of a shock result this time around as Humphries won 4-2 to book a quarter-final meeting with Michael Smith, who defeated Ryan Searle 4-1.

Humphries looked down and out as Cross won the first two sets, but he claimed the next three to take control going into the sixth.

Although Cross looked to have regained his composure as he took back-to-back legs, Humphries rallied again and clinched a superb victory with the third of four match darts.

"I can win this and I want to win this. It will change my life a lot," Humphries told Sky Sports. "Rob's an inspiration. We'll all believe we can win it because we've seen someone do it."

He fights back after being 2-0 down to win 4-2, setting up a quarter-final clash with Michael Smith! #WHdartspic.twitter.com/ZjSrjJhljJ

Cross added: "It's going to hurt, but I've got the monkey off my back and I'll bounce back next year.

"This year's been tough for me. It's been the harshest learning curve I'll ever have in life. At the same time, I've got so much more to give."

Ninth seed Wade passed up five match darts in the sixth set before losing in the seventh.

Dave Chisnall progressed with a dominant 4-0 win over Jamie Lewis to set up a meeting with two-time champion Gary Anderson, while Nathan Aspinall and Brendan Dolan will complete for a place in the last four.