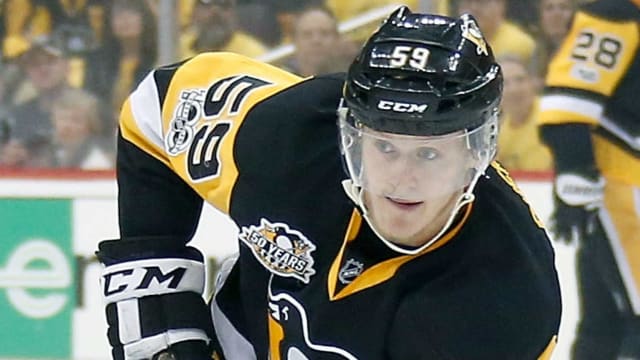 Jake Guentzel is in it for the long haul with the Pittsburgh Penguins after signing a new deal.

On Thursday, the Penguins announced the re-signing of Guentzel on a five-year contract worth $30million.

Guentzel – who won the NHL Stanley Cup with the Penguins in 2017 – will remain in Pittsburgh through to the 2023-24 season.

"Jake established himself as an impact player for our team from the beginning, especially during 2017 Stanley Cup playoffs," general manager Jim Rutherford said.

"He has become a core player on the team and we are thrilled to get Jake signed long-term with the Penguins."

The Penguins have re-signed forward Jake Guentzel to a five-year, $30 million contract extension. The deal begins with the 2019.20 season.

Rutherford on @jakenbake20: “He has become a core player on the team.”

He led the NHL in the 2017 playoffs with 13 goals, and his 21 total postseason points tied the rookie record.

Guentzel then added 10 more goals in the 2018 playoffs, becoming only the second player in franchise history to reach double-digit goal scoring during the postseason of his first two seasons.