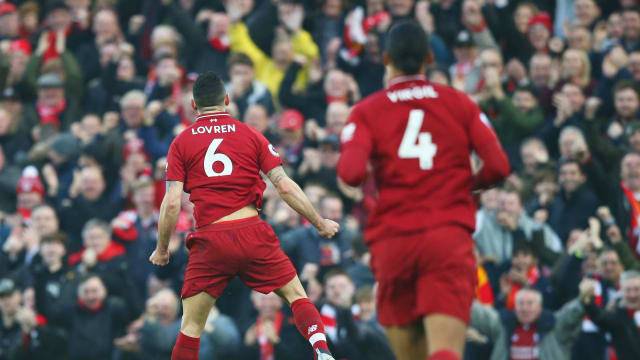 Dejan Lovren insists Liverpool are not feeling under to win the Premier League title, despite their six-point lead at the top.

A 4-0 rout of Newcastle United on Boxing Day, combined with Manchester City's shock defeat at Leicester City, means that Liverpool head into the second half of the campaign with a healthy lead over the reigning champions.

But centre-back Lovren, who netted the opener against Rafael Benitez's Newcastle, claimed Liverpool are not setting any targets just yet.

"When you look at the result it's good for us, of course, but we don't look at who is behind us or in front of us," Lovren said.

"It's more only about us and that's how we should do it always. We learn from all these previous seasons.

"There's no pressure, to be honest. In the previous years, yes, but now when you look in the dressing room, when you go into Melwood in the morning, everybody is happy, nobody talks about anything else than the next game.

"We can't talk about something that will happen in five or six months, we go game by game and we will see where we finish."

Unbeaten in @premierleague matches at Anfield.

However, Lovren acknowledged Liverpool seem to have everything required to go on and crown themselves champions for the first time in the Premier League era.

"I think experience. There are quite a lot of players still here and it was like a puzzle, you just keep bringing these players you missed and now I think it's a perfect match," he continued.

"You feel that in the squad, it's how it should be. There has always been something missing all these years but I think now we have everything.

"But it doesn't mean anything. Even City has in every position two players, top players.

"It doesn't take too long to lose one game and everything changes quite quickly."