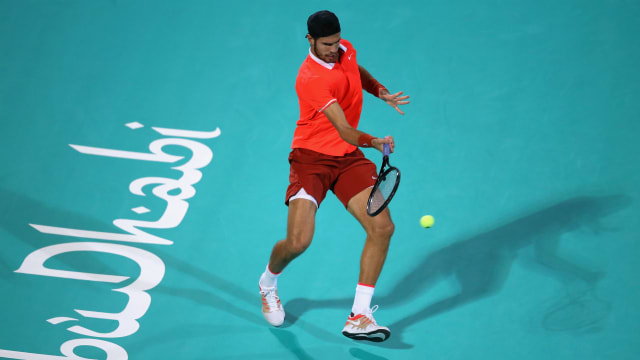 Karen Khachanov booked a semi-final meeting with world number one Novak Djokovic with a straight-sets triumph over Dominic Thiem at the World Tennis Championship.

Djokovic and Rafael Nadal received byes into the last four and the Serbian awaits Khachanov after a 7-6 (7-3) 6-3 victory for the Russian.

Khachanov slipped from 3-1 up to 5-3 down in the opening set but recovered to force a tie-break, before an early break in the second proved enough to clinch the win.

Anderson squandered two set points before losing the first-set tie-break but opened up a 4-0 lead in each of the remaining two sets to come away with a comfortable victory.

.@karenkhachanov takes #MWTC by storm with his victory (7-6(3), 6-3) in his debut in #AbuDhabi against @ThiemDomi. Get set to watch the semi-finals tomorrow with world no 1 @DjokerNole at 7:00PM! Buy your tickets here - https://t.co/AaDLqtLe3b#MarhabaKhachanov#AhlanThiempic.twitter.com/7Unqyx3St5