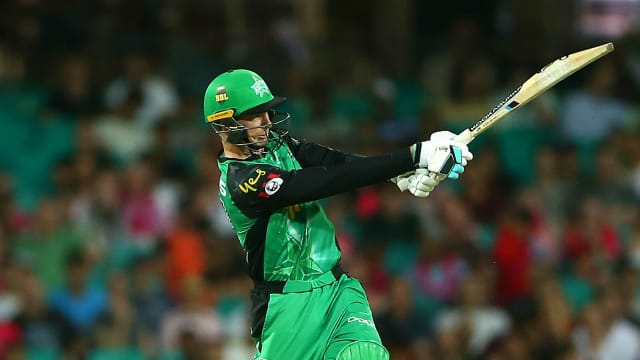 Peter Handscomb sent a timely reminder to the Australia selectors with a superb 70 to propel Melbourne Stars to their first victory of the Big Bash League season.

Handscomb was dropped for Australia's third Test with India at the MCG but he did not let the disappointment faze him as the Stars cruised to a five-wicket win over Sydney Sixers on Thursday.

His knock, from just 35 balls, was a welcome boost for the Stars after defeats in their first two matches had left them bottom of the table.

The wicketkeeper also impressed with the gloves as the Sixers were limited to 130-9, Handscomb stumping Jack Edwards off the second ball of the match.

His catch removed Sean Abbott later in the proceedings after Nepalese leg-spinner Sandeep Lamichhane had impressed with 2-18.

The Sixers' total was never going to be enough for them to claim a second win of the competition as Handscomb flew out of the blocks with an aggressive approach that is sure to grab the attention of the Test selectors.

He cleared the SCG ropes on three occasions and added nine boundaries before giving a simple catch to Moises Henriques with Melbourne 22 runs shy of their target, but it mattered little as victory was secured with 31 deliveries remaining.

The @StarsBBL win in Sydney for the first time since 2015! #BBL08pic.twitter.com/AonN3cZcjg

HANDY HANDSCOMB SHOWS HIS WORTH

The opener raced to fifty from just 22 balls as he launched a blistering attack, reaching his half-century having hit six fours and three maximums.

He had some fortune as he continued to amass runs and although he was unable to complete the job, he made sure that victory was a mere formality.

So much love for Pete Handscomb tonight! pic.twitter.com/KQnhGAOr1O

Teenager Lamichhane has taken to the BBL like a duck to water, showing no signs of nerves in his debut campaign.

His variations caused the Sixers batsmen all kinds of trouble during his four overs as the 18-year-old beautifully deceived dangermen Henriques and Tom Curran.

Lamichhane has seven wickets to his name already for the Stars, which sees him top the standings alongside the Sixers' Steve O'Keefe, who claimed 2-22 in a losing cause.

There was not much else for the Sixers to get excited about as only four batsmen made double figures, but their total would have been much worse had it not been for Jordan Silk.

He made an unbeaten 41 off 37 in the middle order but had little assistance as the Sixers struggled to build momentum, only Abbott (22) able to give him any real support.

That's the end of our batting innings and we've set @StarsBBL a target of 131.@jcsilk14 the pick of the batters, anchoring the innings with 41 not out off 37 balls.

Catch the run chase on @7Cricket and @FoxCricket#smashemsixers#BBL08pic.twitter.com/5JWcyvsRlb