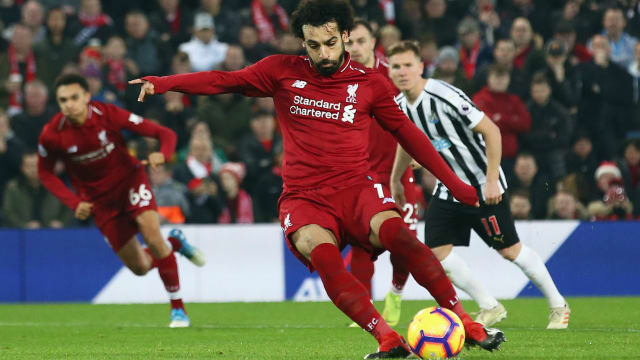 And when Salah stepped up to convert a penalty he won himself immediately after the restart, Rafael Benitez's side were heading to defeat on his Anfield return.

Xherdan Shaqiri and Fabinho added late goals for the rampant hosts and Manchester City's 2-1 loss at Leicester City means the 2017-18 champions fall further behind Klopp's men ahead of their clash at the Etihad Stadium on January 3, with Tottenham moving up to second after thrashing Bournemouth.

Joselu and Shaqiri missed clear chances in an open start at Anfield, with Liverpool taking the lead in the 11th minute.

A diabolical clearing header from Jamaal Lascelles fell straight to Lovren, who smashed a wonderful half-volleyed finish high into the roof of the net.

Martin Dubravka denied Sadio Mane and then made a fine save to keep out a deflected Shaqiri free-kick before the interval.

But Liverpool extended their advantage two minutes after the restart, Salah beating Dubravka from the penalty spot after he was tugged on the arm by Paul Dummett.

And with City dropping points again, Liverpool gave their fans an ideal late Christmas present when Shaqiri tapped in a Trent Alexander-Arnold cross and Fabinho headed in Salah's corner for a close-range fourth.

What does it mean? Reds in ominous form

Newcastle named a weakened side with their eyes on a trip to Watford, with Liverpool not needing to get out of second gear. With City suddenly stumbling the Reds are in a dominant position at the top of the table, although much can change over the second half of the season.

A run of eight straight Premier League wins has come with only two goals conceded by Liverpool, defensive resilience playing a major role in their title challenge. The influence of Virgil van Dijk, who made his 100th Premier League appearance on Saturday, cannot be understated. The Netherlands defender cruised through the game and is justifying his status as the world's most expensive defender - right now, he might just be the planet's top centre-back.

With Salomon Rondon benched there was a fifth Premier League start of the season for Joselu, leading the line for the visitors. But the Spanish striker, who has only scored twice this season in the league, missed two good headed opportunities and never looked likely to trouble Alisson.