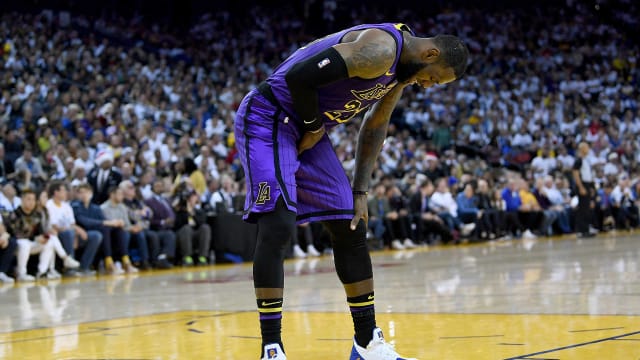 LeBron James will miss the Los Angeles Lakers' trip to the Sacramento Kings on Thursday despite an MRI scan showing no serious damage to his groin.

James left the Lakers' 127-101 victory over the Golden State Warriors on Christmas Day with the injury, the 33-year-old exiting midway through the third quarter.

The Lakers confirmed he will be listed as "day-to-day" while they monitor his progress, but he will not be included for the trip to Sacramento – meaning his 156-game streak without missing a match will come to an end.

"LeBron James will not travel with the team to Sacramento for tomorrow's game against the Kings. He will be listed as day-to-day moving forward."

James, meanwhile, took to Twitter to provide an update of his own, the 14-time All-Star posting: "Dodged a bullet! Sheesh."

His tweet included the hashtag #BackInNoTime, but Thursday's game will come too soon despite telling ESPN after the Warriors game his muscle was "intact".

Dodged a bullet! Sheesh.  to the almighty above! #BackInNoTime