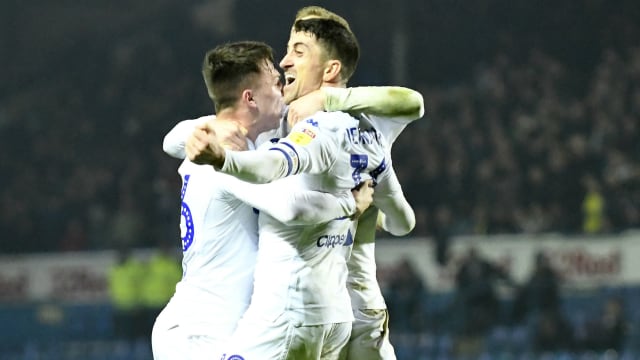 Leeds United won an enthralling encounter over Blackburn Rovers to extend their Championship lead over Norwich City, who in turn produced late heroics to salvage a draw against Nottingham Forest.

The top two both struck twice in stoppage time, Leeds coming from behind to beat Blackburn 3-2 at Elland Road, while Norwich somehow recovered to draw 3-3 with Nottingham Forest, having been three goals down with 14 minutes left.

Jay Rodriguez scored twice as third-placed West Brom recorded a rather calmer 2-0 win over Wigan Athletic to close within three points of Norwich, while Sheffield United defeated promotion rivals Derby County 3-1 on a Boxing Day card where all 24 teams were in action.

Middlesbrough lost 1-0 at home to Sheffield Wednesday to lose ground in the play-off places, while bottom club Ipswich Town lost 3-0 at QPR, a result that leaves them further detached after Bolton Wanderers earned a 2-1 win at home to Rotherham United.

Aston Villa won 1-0 at Swansea City, while there were wins for Birmingham City, Millwall and Hull City over Stoke City, Reading and Preston respectively. Bristol City and Brentford drew 1-1.

Leeds and Norwich both looked to be moving closer to the sides below them as their matches neared a conclusion on Wednesday, only for astonishing finishes in each game to flip the script.

After Derrick Williams' own goal, two Charlie Mulgrew strikes – the second of which came in the 90th minute – had visitors Blackburn on course for victory. However, Kemar Roofe netted twice in stoppage time, the winner coming in the fourth added minute, to delight Marcelo Bielsa and the home support.

Leeds have now won seven straight league games for the first time since September 2009, and are three clear of Norwich.

Norwich's recovery was even more astounding, as they trailed by three after Matty Cash's double and a Jack Robinson effort for Forest.

Mario Vrancic's 77th-minute strike looked like a consolation, but Onel Hernandez got another one back in the fourth added minute, before scoring a scarcely believable equaliser in the 98th minute.

CHANGES TO THE PLAY-OFF PICTURE

West Brom's win was routine, while Middlesbrough and Derby County both dropped a place below them.

Adam Reach scored a 20th-minute winner for Wednesday against his former club at the Riverside, ensuring Tony Pulis' men have lost three of their last five games in the Championship.

Sheffield United took advantage with a 3-1 win over Derby that moves them into fourth. Harry Wilson equalised Billy Sharp's first-half free-kick, but David McGoldrick and Leon Clarke both scored to seal victory for the hosts.

Birmingham - whose 2-0 win over Stoke came courtesy of goals late in each half from Jacques Maghoma and Omar Bogle - now sit two points adrift of Derby, as do QPR.

Villa's win over Swansea came about after Conor Hourihane's strike was followed up by Wilfried Bony having a last-minute penalty saved for the hosts.

BLEAK AT THE BOTTOM FOR IPSWICH

Reading, in their first game under new boss Jose Gomes, dropped into that place after Jed Wallace's early goal was enough for them to lose 1-0 at Millwall, who move out of the bottom three as a result, while the visitors finished with nine men after an early red card for Tyler Blackett and Leandro Bacuna's late dismissal.

That came at the same time as Bolton earned their first league win since September, triumphing for the first time in 14 games thanks to Gary O'Neil's winner 25 minutes from time against Rotherham.