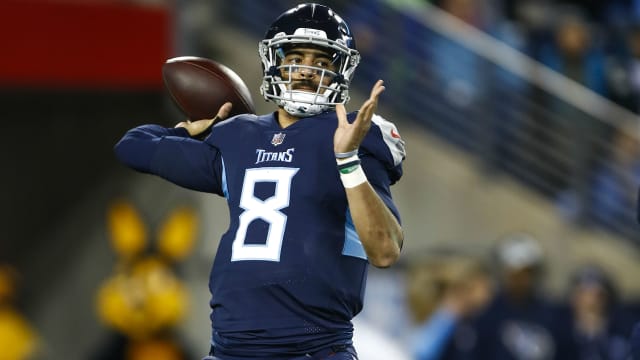 The Tennessee Titans will continue to monitor quarterback Marcus Mariota ahead of Sunday's crucial matchup against the Indianapolis Colts.

Mariota injured his elbow in the first half of Tennessee's 25-16 NFL victory over the Washington Redskins last week and left the game.

Titans head coach Mike Vrabel told reporters that Mariota's status for the team's clash with the Colts is uncertain.

The winner of that game will reach the playoffs while the loser's season will be over.

"We are going to do a little bit of individual work on the field and see if he can do any of that stuff," Vrabel said. "Then we'll kind of keep moving on towards the end of the week and make sure he can do everything that we ask our quarterbacks to do."

Mariota has completed 68.9 per cent of his passes and thrown 11 touchdowns, along with eight interceptions, this season. He has also rushed for two scores.

Backup Blaine Gabbert would start at quarterback for the Titans if Mariota cannot play. Gabbert tallied 101 passing yards and a touchdown to help Tennessee top Washington.