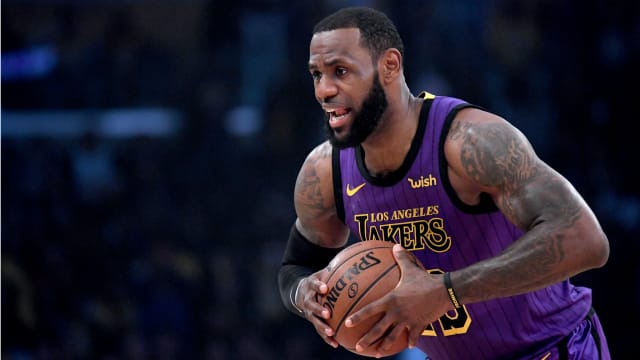 LeBron James wants the Los Angeles Lakers to gain the "championship habits" of the Golden State Warriors as the two teams prepare to do battle on Christmas Day.

Four-time MVP James will face the Warriors for the first time as a Lakers player in one of the NBA's five marquee fixtures on Tuesday.

The Warriors took on James, formerly of the Cleveland Cavaliers, in the last four NBA Finals, winning on three of those occasions.

His Lakers side come into Tuesday's game at 19-14 on the back of a defeat to the Memphis Grizzlies, who won 107-99 on Sunday despite 22 points, 14 rebounds and seven assists from the 33-year-old.

The Warriors, meanwhile, are 23-11 and second in the Western Conference standings, their win over the Los Angeles Clippers last time out their eighth triumph in 10 matches, Stephen Curry scoring 42 points as he continues to shine after returning from injury.

But James continues to urge fans against comparing the two teams at this stage of the Lakers' development.

"We can't measure ourselves versus them," he said, per ESPN.

"That's a team that's won three out of four championships, the last four years. You can't measure yourself versus them.

"It's going to be a very good environment [at the stadium]. Those fans, obviously, love their Warriors. But I don't look at it as a special matchup. We're a team that's trying to get better every week, better every month. They're a team trying to figure out how to win another championship.

"But we want to have championship habits. It's a special day. It's Christmas. We get to play the game of basketball on Christmas.

"It's my 13th appearance. Obviously, I'd love to be home with my family. But if I had to do anything else, playing basketball is pretty cool."