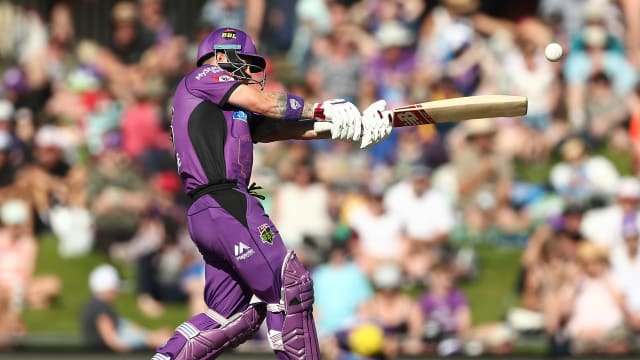 D'Arcy Short starred with bat and ball as Hobart Hurricanes maintained their 100 per cent start to the Big Bash League with a six-wicket defeat of Melbourne Stars.

Short, the top scorer in last year's BBL, made 34 off 22 balls as the home side eased to their target of 156 with eight balls to spare. That the Stars' innings was kept in check was also due, in part, to Short who took 2-23 with his left-arm spin.

Jofra Archer also enhanced his reputation with 3-25 and the Hurricanes rarely looked in trouble after Short and Matthew Wade put on 55 for the first wicket in reply.

The Stars, who have lost both of their opening two matches, will rue not making a better fist of it after Nick Larkin (45 off 33 balls) and Glenn Maxwell, who hit five sixes in his 47, appeared to get things back on track after a dreadful opening powerplay but their dismissals prompted a limp end to an innings of 155 for five.

Wade's 52 and Short's brisk contribution gave Hobart the platform for Ben McDermott (28) and George Bailey (27 not out) to guide their team home.

Sandeep Lamichhane took 3-24 but the Stars' attack failed to fire with West Indian Dwayne Bravo going for 38 from his three overs.

Short's failure to find a taker in the IPL auction continues to look an oversight following another man-of-the-match showing.

The 28-year-old scored 129 runs more than anyone else in the 2017-18 BBL and has got off to a blistering start this time round. A 52-ball 67 in the opening game against Brisbane Heat got him up and running and he again led from the front against the Stars. His bowling is often overlooked but his dismissal of Larkin was a key moment in the game.

On a day of few positives for the Stars, Lamichhane showed his enormous potential with a beautiful four-over spell.

He snared Alex Doolan and McDermott with googlies while he also accounted for the dangerous Wade. But he had precious little support despite captain Maxwell trying seven different options in total.

Dwayne Bravo's decision to swap Melbourne Renegades for Melbourne Stars for this season raised eyebrows but the move has yet to pay off.

The all-rounder, the joint-leading wicket-taker in last year's BBL with 18, has made a slow start with his new team. A run-a-ball 12 failed to give the Stars' innings late impetus while he made zero impact with the ball.