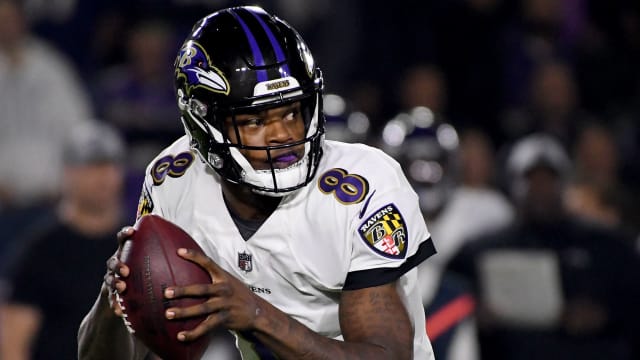 The Baltimore Ravens picked up a crucial 22-10 win over the Los Angeles Chargers in the NFL on Saturday.

The teams combined for nine points in the first half of their matchup as Baltimore went into the locker room with a 6-3 lead.

Los Angeles scored the first touchdown of the game in the third quarter, but Lamar Jackson connected with Mark Andrews on a 68-yard touchdown pass to put Baltimore back on top.

A Justin Tucker field goal put the Ravens up 16-10. Antonio Gates fumbled the football with less than three minutes remaining in the contest and Baltimore capitalised by returning it for a touchdown.

The win keeps the Ravens in control of the final playoff spot in the AFC. They also could move into the division lead in the North if the Pittsburgh Steelers fall to the New Orleans Saints on Sunday.

Washington dropped to third in the NFC East with a 25-16 loss to the Tennessee Titans.

The Redskins kept it close until the fourth quarter, when they were outscored 16-3.

The Redskins trailed 19-16 in the closing seconds, but Johnson threw an interception on the last play of the game, which was returned to the end zone for a touchdown. The pick sealed the win for Tennessee.

The victory moved the Titans to 9-6 this season. They remain just outside of the playoff picture, but could jump into the sixth seed on Sunday, depending on results elsewhere.

Titans quarterback Marcus Mariota left the game against the Redskins with a stinger and never returned.

Titans running back Derrick Henry plays well in December. He had one rushing touchdown Saturday to push his career total to 22. But what is more impressive is that 12 of those scores have come in the final month of the year and just this season, eight of his 12 rushing touchdowns have been in December.

Washington quarterback Josh Johnson seems to be fitting in with his new offense. The journeyman, who signed with the Redskins at the beginning of December, is now responsible for the league's second-longest drive this season, in terms of time of possession.

Adrian Peterson reached another milestone in his illustrious career and is now eighth on the all-time rushing list. After his performance on Saturday, he has over 1,000 rushing yards this season – his first 1,000-plus yard season since 2015.

Ravens coach John Harbaugh on his team's big win over the Chargers: "So many guys stepped up and made plays. Turnovers, tackles, big hits, blocks and runs."

Titans backup quarterback Blaine Gabbert stepped in for the injured Mariota and helped the Titans secure the victory. After the game, he said: "It was a fun win, and it's always fun to win big games, and just go out there and play with the guys. You work hard day in and day out, and sometimes you don't get the chance to play."