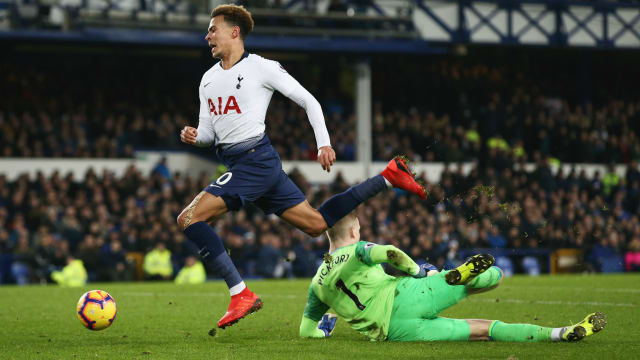 Mauricio Pochettino is hopeful Dele Alli did not sustain a serious injury in Tottenham's Premier League thrashing of Everton on Sunday.

Spurs fought back from a goal down to claim a 6-2 victory at Goodison Park, with Alli and Christian Eriksen scoring once and Harry Kane and Son Heung-min each netting a double.

The result lifts Pochettino's men to within two points of second-placed Manchester City, but their victory was soured when Alli failed to emerge for the second half following a heavy challenge from Everton goalkeeper Jordan Pickford.

Pochettino thinks Alli was fatigued from Wednesday's EFL Cup win over Arsenal and hopes the England star has not suffered anything major.

"He didn't feel a big problem," the Spurs boss told Sky Sports. "Maybe [he was] a little bit tired from Wednesday. I hope it's not a big issue. It was a precaution."

Pochettino added at a news conference: "I didn't see [the challenge]. I am curious to see the action.

"I didn't want to say because I've not seen the video. It was a tough action. We hope it's not a big issue."

Spurs host Bournemouth on December 26 and Wolves on December 29, before heading to Cardiff City on January 1. They then take on Tranmere Rovers in the FA Cup third round three days later.