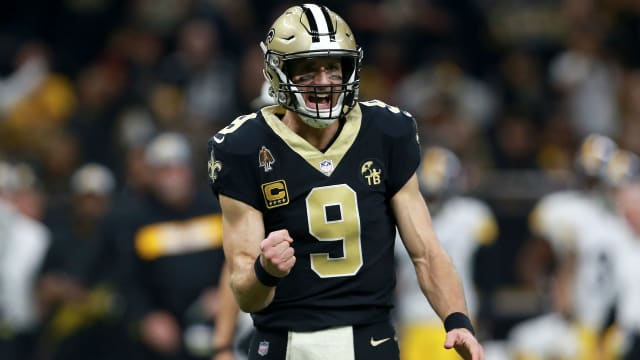 The Dallas Cowboys and New England Patriots clinched their divisions with victories on Sunday, while the New Orleans Saints wrapped up the number one seed in the NFC thanks to a win that jeopardises the Pittsburgh Steelers' postseason hopes.

In Dallas, the Cowboys (9-6) held off the Tampa Bay Buccaneers 27-20 to win the NFC East title – their third in the past five NFL seasons.

Quarterback Dak Prescott had an efficient if unspectacular outing, completing 20-of-25 passes for 161 yards and a touchdown. Ezekiel Elliott added 85 yards on the ground as Dallas won for the sixth time in seven games.

The Patriots (10-5) took care of the Buffalo Bills 24-12 in Foxborough to wrap up their 10th straight AFC East championship.

Sony Michel had a big day on the ground (18 carries for 116 yards and a touchdown), which is a good thing, because Tom Brady passed for only 126 yards and was picked off twice.

A decade of dominance. #Patriots set a new @NFL record with 10 straight playoff appearances and extend the record for most consecutive division titles. pic.twitter.com/l2UTQI8B6U

In New Orleans, the Saints (13-2) clinched the top seed in the NFC playoffs with a 31-28 win over the Steelers.

New Orleans forced a fumble by JuJu Smith-Schuster in the final minute to put the game away. Saints QB Drew Brees passed for 326 yards.

The loss dealt a terrible blow to the 8-6-1 Steelers' playoff hopes. Pittsburgh could have clinched the AFC North with a victory, but now, the Baltimore Ravens will win the division if they beat the Cleveland Browns at home next week.

Pittsburgh could still make the playoffs via a win against the Cincinnati Bengals, but with a 9-6-1 finish they would lose out to a 10-6 team (either the Indianapolis Colts, Tennessee Titans or Houston Texans) for the second AFC wild-card spot.

Elsewhere, the Texans had a chance to wrap up the AFC South but super Bowl champions the Philadelphia Eagles shot down those plans with a 32-30 triumph thanks to Jake Elliott's field goal as time expired.

That win kept the Eagles' playoff hopes alive. The Texans can still win their division by beating the Jacksonville Jaguars, but the Colts and Titans, who play each other in week 17, are still alive in race. The Texans did clinch a playoff spot, though, thanks to Pittsburgh's loss.

Bengals linebacker Vontaze Burfict left Sunday's 26-18 loss to the Browns in the first half with a concussion. Browns cornerback Denzel Ward is in the concussion protocol after getting hurt in the fourth quarter.

Buccaneers wide receiver DeSean Jackson exited in the second half with a foot injury.

Bears WR Allen Robinson was injured making a diving catch of a 43-yard pass in the first quarter against the San Francisco 49ers.

Colts tight end Eric Ebron left in the first half with a concussion, and center Ryan Kelly went out early with a neck injury.

Receiver Cordarrelle Patterson left the Patriots' triumph against Buffalo because of a knee injury.

Brady passed the 4,000-yard plateau Sunday, making him only the fourth QB in NFL history to top that mark in at least 10 seasons. Peyton Manning, Brees and Philip Rivers are the other three.

Smith-Schuster (106 catches in 2018) and Antonio Brown (104 catches) are the first Steelers team-mates to top 100 receptions in the same year.

New York Giants star Odell Beckham Jr. tweeted out condolences to Steelers receiver Smith-Schuster, whose last-minute fumble ended a possible game-tying or winning drive against the Saints. "Head High killa! These moments make u... never break u! The ultimate measures of a man is not where he stands at moments of comfort n convenience but where he stands at times of challenge and controversy."

New York Jets head coach Todd Bowles ripped the officiating after his team's overtime loss to the Green Bay Packers. "I thought we were playing two teams … the Packers and the striped shirts."

Dak Prescott downplayed the fact Dallas gained only 232 total yards against the Bucs' 28th-ranked defense in their victory. "We won the game. At the end of the day if you won the game, you scored more points than they did. That's all that matters.''