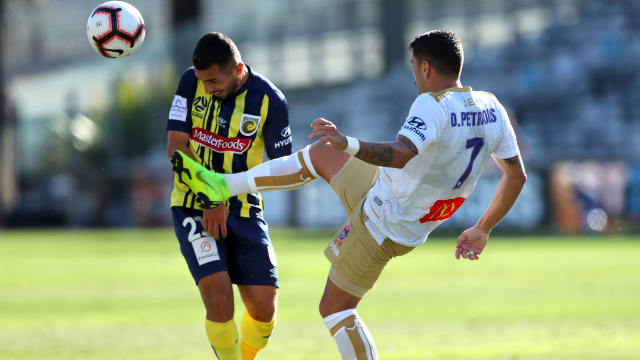 Struggling at the bottom of the table after collecting just two points from their previous eight A-League games of the season, the Mariners took a first-half lead through Matt Simon.

But Jason Hoffman headed in a 66th-minute equaliser for the Jets, who handed the Mariners a seventh straight loss when Vargas struck.

Newcastle welcomed Roy O'Donovan back from a 10-match ban, but the forward struggled to have much of an impact on his return.

Mariners midfielder Michael McGlinchey and Jets star Dimitri Petratos were denied from decent positions with free-kicks before Jair blazed over from inside the area for Newcastle in the first half.

Matt Millar did well down the right before clipping a cross to the back post, where Simon headed in.

The game started to develop a derby feel as the half wore on before Connor Pain squandered a great chance for the Mariners in a one-on-one after the break.

That miss would prove costly as the Jets equalised in the 66th minute, Hoffman rising highest to head in a Jair corner.

Newcastle had an 80th-minute effort ruled out for offside before Vargas delivered the winner, the attacker finishing clinically after a beautiful pass from Kaine Sheppard.