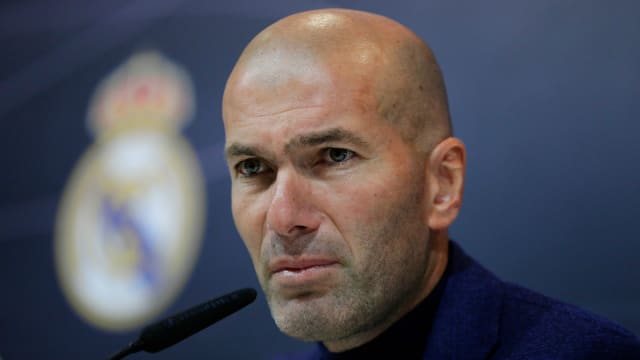 Solari, the replacement for Zidane's short-lived successor Julen Lopetegui, led Madrid to their first title under his stewardship with a 4-1 win over Al Ain in Abu Dhabi on Saturday.

Victory means Madrid have won the tournament three years in a row and their fourth triumph in the competition moves them clear of rivals Barcelona as the Club World Cup's most successful team.

Solari, though, was quick to pile praise on Zidane, who surprisingly stood down in the wake of winning Madrid's third consecutive Champions League crown at the end of the 2017-18 season.

"We are happy, these players deserve it, they have come here after a lot of work and a lot of wins," Solari told TVE.

"We put a finishing touch to that third consecutive Champions League, it is a feat of the club, this group and other coaches.

"We are also here thanks to Zidane. It will be difficult to match in the future."

Listen to what goalscorer @lukamodric10 said after helping us become WORLD CHAMPIONS! #RMCWCpic.twitter.com/oO6FTjYLCI

Marcos Llorente was among Madrid's goalscorers in the final, the 23-year-old midfielder scoring his first goal as a professional with a half-volley from the edge of the penalty area.

Llorente was overlooked throughout Zidane's reign but has grown into a key role since Solari took charge, following Lopetegui's sacking after just four months in charge.

"They are all Madrid players and they all work to be able to do what they do in the field," Solari said.

"Marcos has always worked a lot, and he deserves the credit."

A first trophy for Santiago Solari as @realmadriden manager #ClubWCpic.twitter.com/cogKjGUgyy

Solari's opposite number Zoran Mamic felt a gruelling Club World Cup campaign caught up with his tired Al Ain side in the final.

"The first thing is to congratulate Real Madrid because they deservedly won it, with good football," he said.

"We have not been able to compete, it's the fourth game in days and that has weighed on us. We had a great tournament, nobody thought we were going to get here.

"We had opportunities in the first half, but we missed them and at this level we pay when Real Madrid are in front.

"We would have liked to have more days of rest, but everything is set up and we cannot say anything, I sincerely believe that we have done a good job."