Luka Modric: I should shoot more! 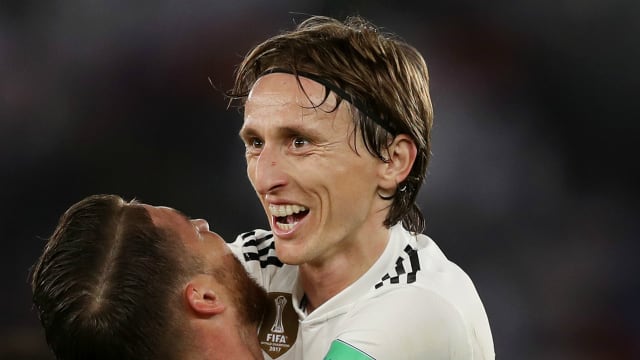 The midfielder wrapped up a golden 2018 with the first goal in a 4-1 win for Santiago Solari's side, who won the tournament for the third year in a row.

It was also his first goal in a final for Madrid and the Croatia international suggested he might go for goal on a more regular basis after his unerring 25-yard finish.

"Everyone tells me I have to shoot more, although I usually prefer to pass," Modric said to Real Madrid TV. "I should shoot more, it's true.

"It is an unforgettable year for me, a perfect year, winning the Champions League, then Croatia had a spectacular World Cup and then all these prizes arrived, now another trophy with Madrid.

Madrid's second goal was scored by Marcos Llorente, who broke a 71-game wait for his first goal as a professional footballer with a 20-yard half-volley.

The 23-year-old midfielder has become increasingly influential under Solari and was thrilled to make a decisive impact in the final, earning the man-of-the-match award.

"I am very happy to get the [man-of-the-match] trophy - more for the goal and more for the final we just won," he said.

"Now is when you look back and see everything you have worked and fought to achieve this. It's time to enjoy it with family, friends - they are the ones who can stand you when things are not going well.

"Dreaming, I dreamed it, but I saw it was very far away. It was very difficult, obviously, it was a dream, but I was not expecting to reach the first team and win finals like this.

"We have worked on everything to achieve this kind of thing. I almost never score goals, so the day that goes by I get a little bit excited, it's time to enjoy it and be happy."