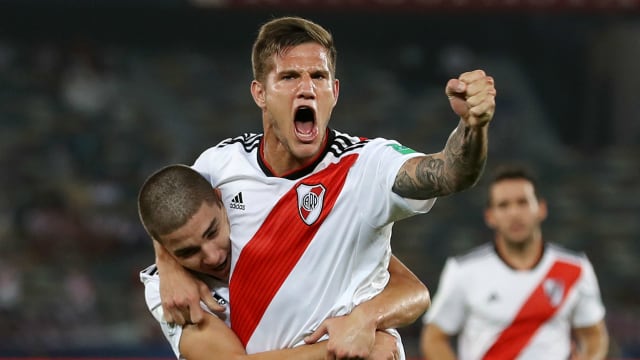 Beaten on penalties by Al Ain in the semi-finals, River – who have yet to return to Argentina following their Copa triumph over rivals Boca Juniors in Madrid – made light work of AFC Champions League winners Kashima in Saturday's encounter.

Although Jung Seung-hyun hit the crossbar, Kashima were on the back foot from the off – Kwoun Sun-tae pulling off fine saves to deny Julian Alvarez and Santos Borre respectively.

Kashima's goalkeeper was forced off with an injury soon after, and replacement Hitoshi Sogahata had little chance of preventing Bruno Zuculini's 24th-minute header clipping in off the upright.

With Sogahata having kept out another Borre effort, Kashima almost levelled against the run of play on the stroke of half-time, but Koki Anzai's strike clattered off the woodwork.

Borre had a goal disallowed for offside after the interval, but River doubled their tally when substitute Martinez – who will join MLS club Atlanta United for 2019 – hammered home from Alvarez's throughball.

Shoma Doi and Ryota Nagaki were both denied by the crossbar as Kashima rallied, but any hopes of a comeback were ended when Borre slotted home from the spot after Tomoya Inukai's foul, with Martinez's delicate chip adding further gloss in stoppage time.