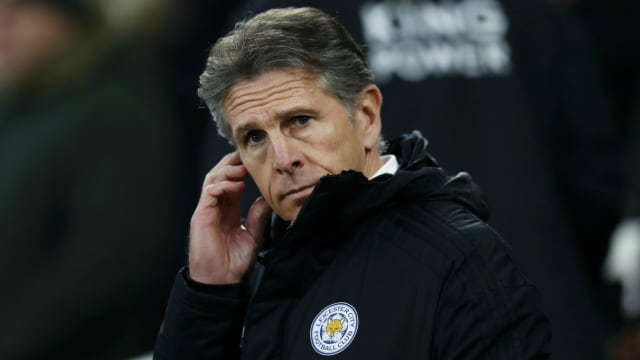 Claude Puel insists Leicester City's surprise win at Chelsea was not vindication for his team selection against Manchester City in midweek as he does not need to justify his line-ups.

The Frenchman faced criticism from certain quarters for making too many changes in the EFL Cup quarter-final tie, including dropping Jamie Vardy from the squad, which City won on penalties.

Vardy returned to the starting line-up to score the only goal against Chelsea in the 51st minute and end Leicester's 18-year wait for a win at Stamford Bridge.

Yet Puel says rotating his squad was crucial ahead of a busy festive period.

"I have nothing to justify, I manage my team, then try to give my best to find always a good balance for this busy period to protect the players and keep always the best results," he said.

"I have to put out teams with ability to win the games; if you saw the game versus City in the cup it was a good game, it was a draw, we lost the lottery of the penalties.

"We came through a difficult period in the game [against Chelsea] and perhaps we deserve the result. We played the game with confidence, we played away against Chelsea who are a good team with good players, our performance against City was very encouraging and we continued in this way.

"The goal was a fantastic move. I was happy for Jamie of course to finish and be clinical with fantastic service from Maddy [James Maddison] also. After we continued to defend like a team, with 11 players, with a feeling that this mentality [would help us] to keep this result."

Facials say it all What a win!!! Assist for the bagsman @vardy7 Merry Christmas ya filthy animals #JM10pic.twitter.com/vvNBt2WNYd

Puel's future at Leicester came into question following reports that he is facing the sack at the King Power Stadium, with speculation suggesting there was disharmony among the squad.

"I have no comment about this, I make my work, it's not all the time easy," he added.

"All the time it's important to analyse the games and not just look at a result or ranking of the table.

"If we analyse the start of the season we make fantastic performances without the consistency.